Finally, all the members and their avatar counterparts of SM Entertainment's rookie girl group aespa have been revealed. On November 9 KST, aespa unveiled the photo and teaser clip of member Ningning along with the image of her avatar counterpart.

Since then, some Korean netizens have stated that Ningning's avatar looks vastly like BLACKPINK's Lisa. One netizen made a post on an online community with a side-to-side comparison with ae-Ningning and Lisa.

The netizen stated that many Korean K-pop fans have stated that ae-Ningning looks too similar to Lisa, starting from the face and even the costume. The netizen posted photos of Lisa from the 2019 Gayo festival, in which Lisa was seen wearing a glittery outfit with abstract prints.

According to the netizen, Lisa's costume back in 2018 was a one-piece dress reformed to be a two-piece and Ae-Ningning's dress seems vastly similar to Lisa's costume.

Korean netizens have been in a fervent discussion whether they believe the character is similar to BLACKPINK's Lisa.

"I think the avatar does look more like Lisa than Ningning."

"I think they took Lisa's costume as a reference."

"It seems like Lisa was the model for the avatar design. She looks so similar to Lisa."

"I'm not a BLACKPINK fan or an aespa fan, but I think the avatar looks like Lisa."

"Looking at them side to side, I say the avatar looks like Lisa."

"I don't really see the resemblance to either one."

"I would say that avatar can be Lisa's avatar."

"The clothes are similar and her face is similar too."

"Just from the picture, anyone can believe that's Lisa's avatar."

"To be honest, I think the avatar looks neither like Ningning or Lisa."

Yep, I definitely see the resemblance. 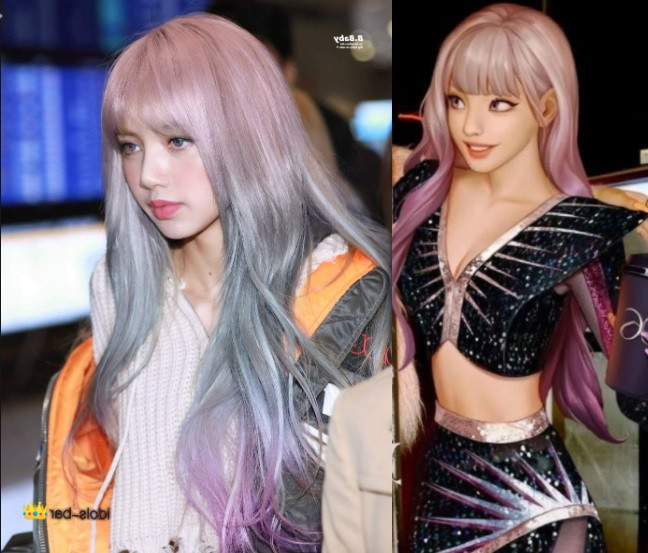 "The clothes are similar and her face is similar too."

Not a blink anymore or do I stan asepa, but seeing them side by side makes them look similar.

Netizens think Kang Hye Won has the aura of an actress based on her new profile photos
2 hours ago   6   3,327

iKON's Bobby supports former bandmate B.I by commenting on his Instagram
4 hours ago   22   9,375

Highlight's Yoseob tears up after hearing these words from a fan during online fansign
6 hours ago   17   11,044

BTS's V joins names such as Barack Obama and Taylor Swift on "You vs. People Your Age" list of most accomplished individuals
22 hours ago   102   16,743

Netizens wonder why a journalist would write the headline: 'Bobby supports B.I...drugs could not ward off true YG friendship'
40 minutes ago   6   2,620

Netizens think Kang Hye Won has the aura of an actress based on her new profile photos
2 hours ago   6   3,327

BTS's V joins names such as Barack Obama and Taylor Swift on "You vs. People Your Age" list of most accomplished individuals
22 hours ago   102   16,743

Netizens surprised by the results of one street survey, asking Koreans 'Who is the most famous Japanese celebrity in Korea?'
1 day ago   78   74,351

NCT Dream's Renjun forgets to put on his headset mic during group's comeback stage, revealing that the entire stage is lip-synced
2 days ago   338   67,304