On the September 30 broadcast of MBC's 'Radio Star', actress Lee Yu Bi honestly opened up about being publicly known as the daughter of a top veteran actress, Kyeon Mi Ri.

First, Lee Yu Bi told the story of how she starting acting without telling her mother. "I was attending university as an opera major. But I found the same old routine day after day boring. While I was debating on changing my major, I received an offer to be cast. It was a role in a sitcom. I was told that filming would begin in 2 weeks. When I told my mom about it, she was furious. She warned me it might be a scam. But that's how I got started acting."

Lee Yu Bi also talked about a time when sunbae actor Baek Il Seob, also a guest on this episode, touched her with his kind words. "I will live as the daughter of my famous mother all of my life. I was convinced that I wasn't affected by it that much, but then when [Baek Il Seob] told me one day, 'You're a better actress than your mom', I found myself crying."

The actress went on to share more stories about her mother scolds every public aspect about her out of worry. "She tries to get me to practice reading my scripts in front of her. And then when I do, she goes off with 'Do this', 'Do that', and goes on and on. But in my opinion, if I try to read the script like my mother tells me, then I would just turn into her."

However, MC Ahn Young Mi commented to this, "I'm envious. Isn't your mom so cool, confronting your malicious commenters?" Check out the clip from this week's 'Radio Star' below!

So its true when knetz said she always talk about her top actress mother, i never heard her actress sister did what she did also imo her sisters acting is better than her

SHINee's Minho writes 'This is SHINee five' as he posts behind-the-scenes photos from the group's comeback jacket photoshoot
5 hours ago   11   20,112 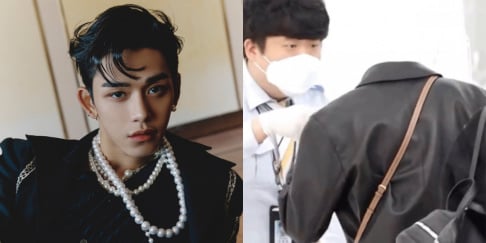 iKON talk about how happy they are being the busiest they've ever been since their debut these days
1 hour ago   4   2,616

TVXQ's Changmin impresses professional chefs with his skills in the kitchen on 'Flushed-Cheek Feast of Hermits'
3 hours ago   1   1,525

Stray Kids's Hyunjin once again personally apologizes to his former classmates in a handwritten letter
1 day ago   115   24,402