This is where V really got his friendship tattoo

This year was filled with surprises for BTS fans as the group made a surprise announcement of their group activity hiatus back in June of this year, and the members revealed their friendship tattoos.

Almost all the members have already officially revealed their friendship tattoos through social media. In particular, many fans became interested in where V got his tattoo. This is because there has been a discussion about whether or not V had really gotten a tattoo or not. He even joked that he got the tattoo on his left buttcheek.

Then recently, one netizen explained that V's tattoo was shown in his latest pictorial with 'Vogue,' which proves that V did get a friendship tattoo.

The location is on his left thigh.

Additionally, the netizen who created the online community post about this topic revealed that the tattoo artist who tattooed V had been following the idol and even confirmed that V had gotten the friendship tattoo.

Netizens commented, "There's still akgaes who say that V didn't get a tattoo, feel bad for V actually," "Even if they see his tattoo in person, they will deny that he got a tattoo," "V was the first one to mention the friendship tattoo, why are everyone worried that he didn't get a tattoo?" "People are so interested in V," "The tattoo in the recent pictorial shows it's an obvious 7, lol," and "So many people are so interested in where V got the tattoo when SUGA didn't even reveal where he got it but no one is talking about his tattoo."

When you are famous and people are too invested in every little thing about you.

A tattoo isn't what's gonna keep BTS together so why is this a big deal? It's his body & he doesn't have to get one. His father also doesn't approve. 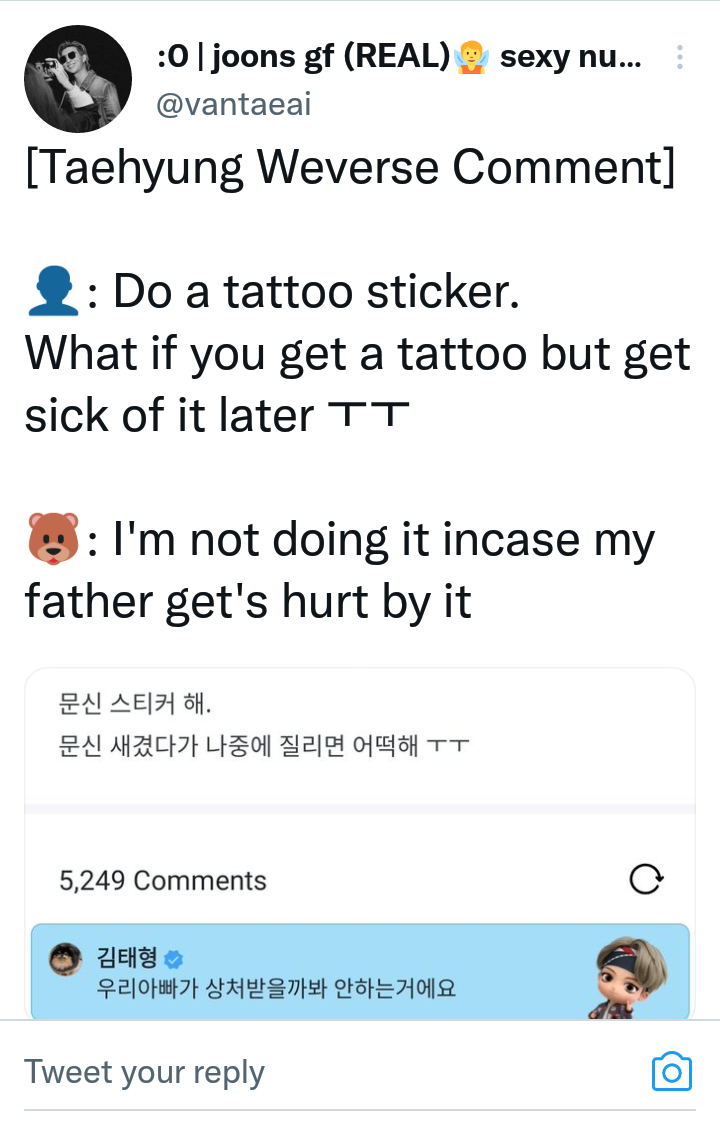 Park Soo Hong cooks a meal for kids from a foster home he's helped for 20 years, thanking them for leaving encouraging comments during his difficult times
11 hours ago   14   7,258

BTS becomes the first to receive the MAMA Platinum award for winning all four Daesangs at once
3 days ago   49   28,680