It was reported Solbi sold all three of her art pieces featured at the Saatchi Gallery in London.

Previously in August, Solbi showcased her art pieces 'Just a Cake- Piece of Hope' series at the FOCUS Art Fair. From August 13th at the Saatchi Gallery in London, the art fair was held until September 4th under the theme 'Color of Life' in the Fold and Fitzrovia Galleries.

According to reports, her art piece, 'Just a Cake - Piece of Hope' took on the motif from her previously controversial cake art that was accused of plagiarizing Jeff Koons' art piece 'Play-Doh.' The art pieces she displayed at the Saatchi Gallery uses melted candle wax and sculpted to look like the cake cream from her previous work that was controversial.

Solbi previously posted photos of her cake art piece on her Instagram and was accused of plagiarizing the art piece 'Play-Doh.' The cake she had created vastly resembled Jeff Koons' artwork that he had created back in 2014.

The controversy heightened when she posted the photo of her cake, explaining that her fans would be able to buy it soon since it is available to order. However, as many netizens criticized that her cake resembles Jeff Koons' 'Play-Doh,' Solbi edited her post and deleted her phrase that the cake can be ordered. Instead, she explained that she got inspiration from the American artist and elaborated that she is not selling the cake but would be eating it herself.

Nevertheless, Solbi continued to explain that she has only paid homage to the artwork from the American artist and will not sell the cake. However, netizens discovered that Solbi had posted the cake online for sale despite explaining she would not sell the cake. With more and more netizens criticizing Solbi, she put a stop to the online cake orders.

After a year since the controversy, Solbi showcased her art pieces titled 'Just a Cake- Piece of Hope,' taking the motif from her cake. Once again, many Korean netizens expressed their disappointment and their hopes that she apologizes for plagiarizing. Netizens commented, "She blatantly copied someone else's work and still uses the same motif to make money," "She's so shameless," "She should apologize for plagiarizing," "She just openly copied Jeff Koons' Play-Doh...I wonder if she's not ashamed," "Solbi is just amazing," and "She needs to apologize. I can't believe she is still making artwork with the same motif."

She used to sell expired cakes in her cafe not so long ago. 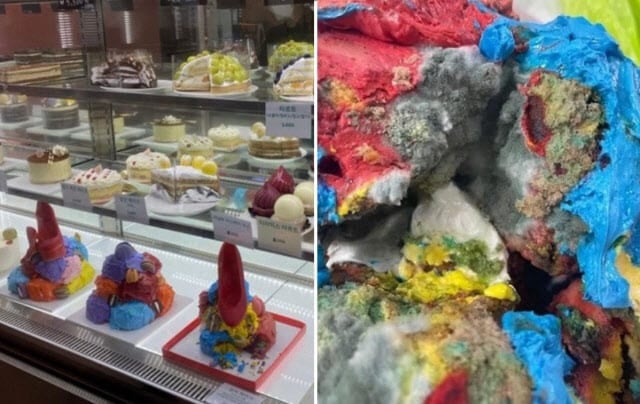 Solbi's art is...terrible. However, she has done a lot of good for society. Like she introduced laws that protect women's rights in Korea. Plus shes a good singer and has really unique music. I wish she focused more on those aspects of her life, but she's making tons of money doing this.

"I want everyone who is not a dancer to be disqualified" 'Street Woman Fighter's Monika expresses her anger during the Mega Crew mission
13 hours ago   98   76,763

"I want everyone who is not a dancer to be disqualified" 'Street Woman Fighter's Monika expresses her anger during the Mega Crew mission
13 hours ago   98   76,763