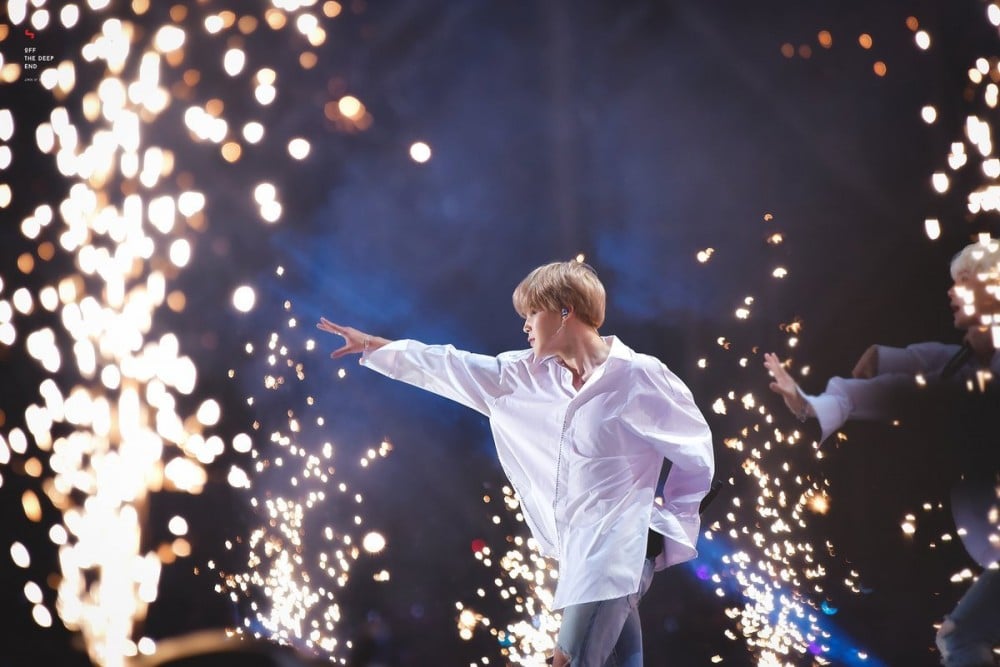 One netizen took incredible photographs of guitar-playing super talent, Park Chanyeol of EXO. Instead of a fan-taken concert image, the picture looks perfect as a promotion image for a rock-band sub-unit starring Chanyeol and his skills!

NCT's Taeyong was captured by one of his biggest fansites at an amazingly beautiful moment! With the pyrotechnics in sync with the shot, it looks like Taeyong is shooting fire out of his hands! What a perfect fan-taken image of one of our favorite idols!

Mina is without a doubt one of the strongest visuals in Twice, however, in this fan taken candid of her getting out of a car, we're beginning to wonder if she should pursue modeling full-time! She looks absolutely flawless getting out of the vehicle and we think the image looks like a promotion for a new Twice concept rather than a candid!

In a performance of "Why?" at the Busan concert, a fan captured Taeyeon doing an epic air kick! We think this wonderfully artistic shot would serve great as a poster to a new dance movie! Starring Taeyeon? Not bad!

SISTAR remains in our hearts forever and so will this fan taken photograph of Bora! It just so happens that this photograph was taken during SISTAR's last fanmeeting at around 4 in the morning. Bora is acting cute and showing aegyo to the fans, but in her eyes are tearful. This photo is truly one in a million!

Park Jimin of BTS is one of the strongest visuals in all of K-Pop and this picture of him looking at the confetti is the perfect moment captured on camera. We're starting to think that these fans and fan site owners should consider a career in photography! Are we sure this isn't a painting?

credit goes to: Off The Deep End
7. Lay

During the EXORDIUM performance in Seoul, Zhang Yixing, aka Lay, bared it all in a rainy dance setting! The picture taken by the fansite "Down South Up North" is timed perfectly! Any second earlier or later wouldn't have warranted as fantastic of a shot of Lay. Great job!

credit goes to: Down South Up North

Upload your favorite fan taken shots and share them with the AKP community in the comments below!

The Rose reported to have filed to nullify their contracts with agency for failure of payments
4 hours ago   18   22,717

Heo Ji Woong makes a statement against churches who are forcing people to gather and disregarding Coronavirus concerns
8 hours ago   29   15,465

The Rose reported to have filed to nullify their contracts with agency for failure of payments
4 hours ago   18   22,717

Netizens angry at Seolhyun for having fun in New York while South Korea is struggling through the Coronavirus outbreak
3 days ago   158   156,144