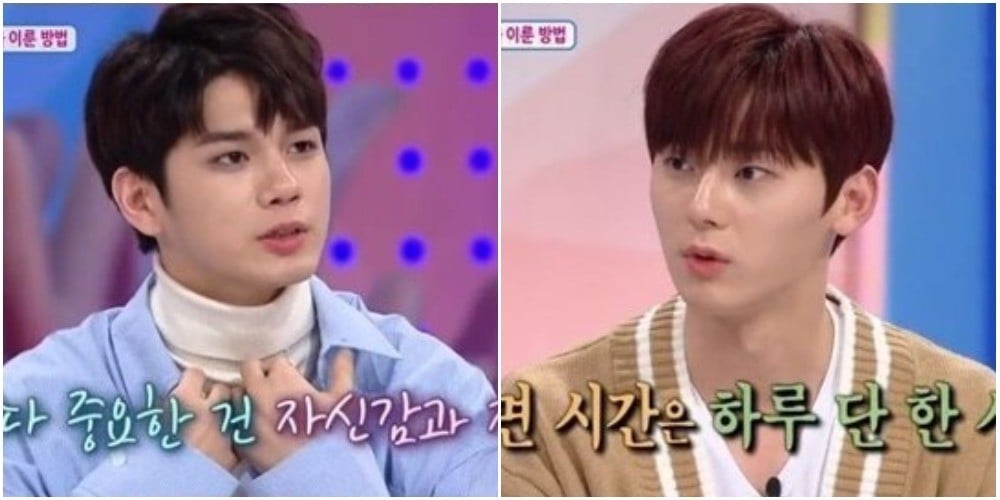 The Wanna One members talked about how hard they've worked for their dreams.

One contestant of the show shared concerns about his younger sister, who wants to become a model but doesn't try at all. While in the discussion about this issue, the MCs asked the idol stars about the hardships they faced while working toward their dreams.

Hwang Min Hyun said, "I started dreaming of becoming a celebrity in middle school" and added, "Appearing on an audition program was desperateness itself. We wanted to become Wanna One so bad that I practiced while only sleeping 1 hour (per day) during the 6 months."

Next, Ong Seung Wu said, "It's been 10 years since I started dreaming of becoming a celebrity. I've worked hard and also played hard before. Out of all, I think confidence and self-esteem are the most important. Of course, there were times when I felt discouraged and ashamed but I had hope thinking, 'I'll succeed. I'll do big'."

Kim Jae Hwan also said, "During college, I really wanted to sing but it wasn't easy. I had to work part-time. I worked hard and with the money I made, I rented a practice room and practiced."

AKP BUZZ
Koreans donate to "brother" Turkey for the wildfires after seeing Turkish volleyball players in tears
1 hour ago   12   5,949

Employees at a Chinese company allegedly fired for discussing the possibilities of having Kris Wu represent the brand
4 hours ago   22   9,517

AKP BUZZ
Koreans donate to "brother" Turkey for the wildfires after seeing Turkish volleyball players in tears
1 hour ago   12   5,949

BLACKPINK's Jennie gains attention for wearing a chain accessory around her thin waist, netizens predict it will start a new fashion trend
16 hours ago   87   85,812