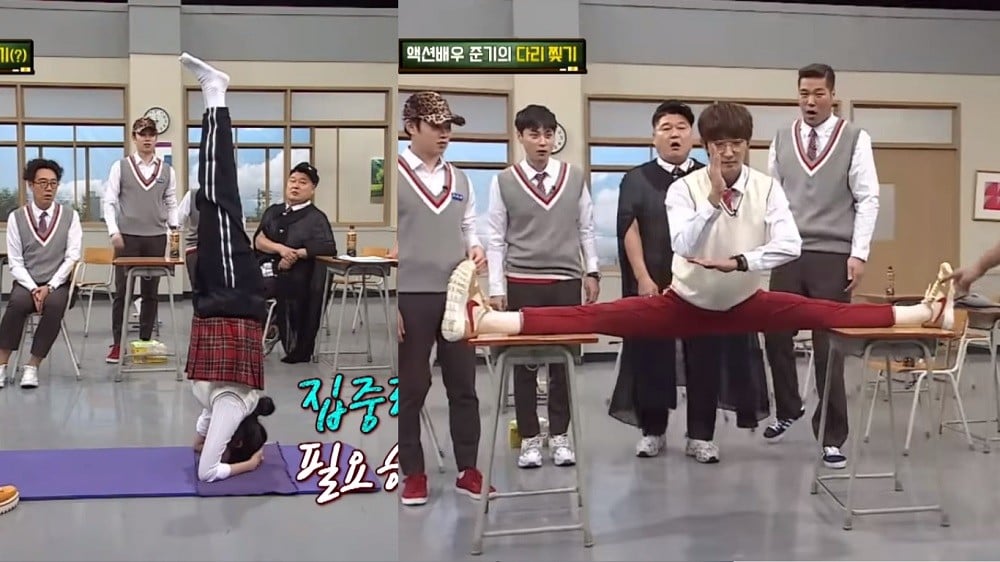 IU and Lee Jun Ki showed off their physical flexibility on 'Knowing Brothers'.
On the October 20th episode, the celebrities guested on the show as two good friends in the same industry. One of the similarities that the two shared was that they were both flexible; IU had refined her agility and focus through yoga, while Lee Jun Ki stretched out consistently as an actor fit for the action genre.
During the show, IU showed one of her yoga poses that allowed her to balance on her head. Meanwhile, Lee Jun Ki reenacted one of his signature poses from the movie 'King and the Clown', with a scene in which he perfects a split.
All the hosts were impressed by both of their flexibility, but some entertainers almost pulled a muscle trying to mimic them! Watch both clips above and below. Can you also do the splits like Lee Jun Ki or a yoga pose like IU?
Share this article
Facebook
Twitter
5 8,304 Share 100% Upvoted

I hate my self for objectifying LJK, but that booty when he did the split had me shook.

I'm gonna see myself out now.

Woollim opens investigation after signed album gifted to Lovelyz by another artist is seen being sold illegally
10 hours ago   20   16,921

BTS V becomes a trending topic worldwide as he breaks Psy's massive record becoming the Asian Soloist with Most #1s on the 'iTunes Top Songs Chart'
14 hours ago   46   8,069

IZ*ONE label updates fans on status of lawsuit against malicious commenters
15 hours ago   8   4,302