Controversy arose after Lee Hyori and YoonA visited a karaoke spot during the ongoing COVID-19 pandemic, and both Lee Hyori and YoonA apologized on social media. On the July 11th episode of 'Hangout with Yoo', Lee Hyori, Yoo Jae Suk, and Rain gathered together to practice their upcoming debut track "Once Again This Beach" composed by Lee Sang Soon.

Yoo Jae Suk mentioned to Lee Hyori, "Let's be careful before our debut," and Lee Hyori responded with tears falling down her face, "I'll be careful." She wiped away her tears, saying, "I might leave the group. Find another member," which Yoo Jae Suk and Rain were against. She added, "I was so excited. I should stop being Linda G. I shouldn't cause trouble to the team like this."

Rain and Yoo Jae Suk comforted her by handing her tissues and saying, "Lee Hyori is also human." She further apologized, expressing, "I didn't think as much as I should have."

In other news, SSAK3 recently dropped the music video for the remake of their track "In Summer".

DONT CRY BABY!. Dont worry. We support and love to Both Queens, Yoona & Hyori !. Even Knetz supporting and loving to both Queens too.

They BOTH did nothing wrong. the only guilty is the journalist overreacting in a situation where there is no problem
.
YoonA and Hyori became two close friends and Two Great Legends of Kpop.
1. They BOTH were in an PRIVATE ktv room for ONLY TWO ppl, and both took precautions, Both wore masks. K-tv room is not prohibite in South Korea. Therefore They didn't do anything wrong.
2. KNETZ defended YoonA and Hyori because the Journalist was making an issue out of nothing. the journalist overreacted in a situation where there is no problem.
3. KNETZ defended YOONA and HYORI even BEFORE they post their letters of apology,
4. INTERNATIONAL PPL & KPOP FANS also supported and protected YOONA & HYORI, many ppl and kpop fans argued that They both should not apologize for anything because they did nothing wrong.
5. KNETZ also agree that Both kpop legends should not apologize cause they did nothing wrong. In this situation the ONLY GUILTY was the JOURNALIST who was making an issue out of nothing. 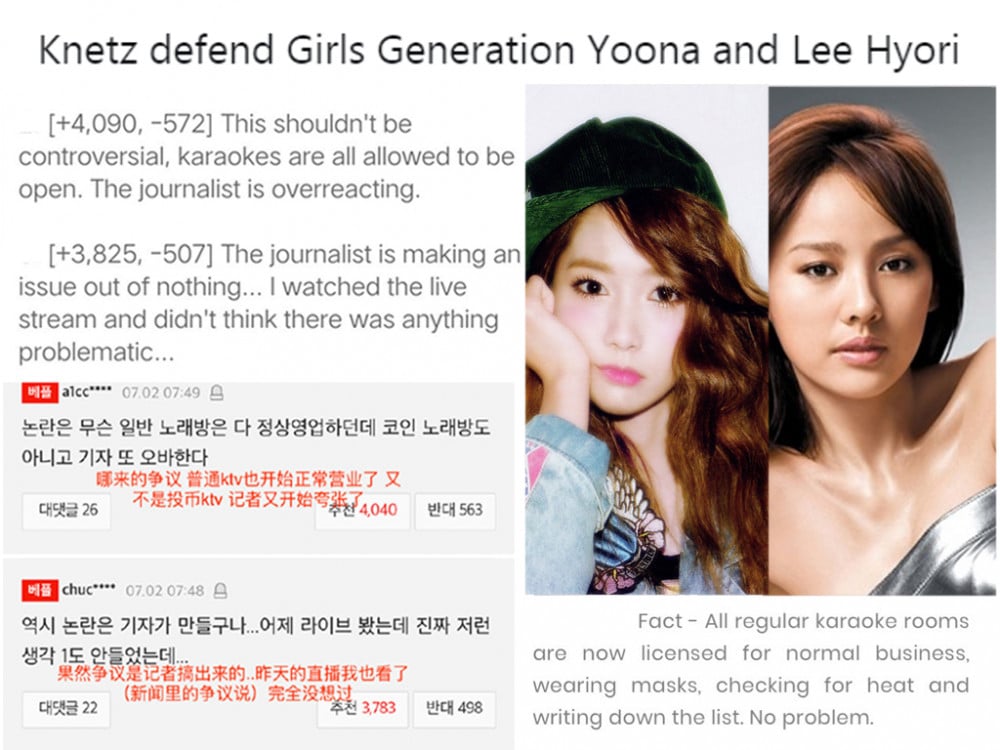 Let's look at South Korea: many ppl travel to the beach with their family or friends or attend weddings or birthdays without wearing a mask nor much social distance. Look at the tv-music show, filming set for k-dramas/movies, mr. trot, restaurants, cafes and theaters where there are a larger number of ppl interacting even some ppl without masks, and nobody has criticized them but the journalist makes an issue out of ONLY 2 bestfriends in a private k-tv room, even wore masks.

* Check Photo: This is Seoul around 23 June ~2 July, 2020 and INDOOR cafes and theatres are crowded with people. 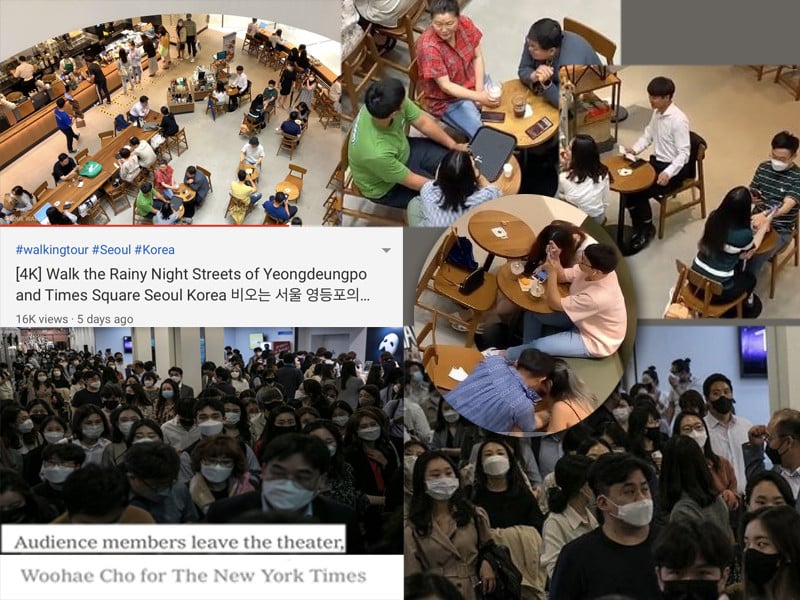 +/+/+
Why have some kpop fans been shock to see Lee Hyori cry?
kpop fan said: "well, Hyori is known to be a very strong and brave woman, she almost never cry, but this time she cried because she feels guilty for having involved Yoona in this situation, Yoona is very well known for being one of the Kindest ppl and celebrities with a clean reputation in the world, so Hyori must have felt so deeply worried and sad because almost damaged Yoona's clean image, (she is also one of her closer friends), To see a woman as brave and strong as Hyori crying, really touched our hearts, she really must have felt deeply pain and worried for this situation where the only culprit was the journalist who overreacted for a situation where there was no problem because they only sought to damage the image of both kpop legends. We are sure Yoona must have comforted Hyori, Just as we are sure Yoona would never blame Hyori for this situation because Yoona is a sweet angel, They BOTH are VERY GOOD people and Queens, and close friends, they deserve all the love of world. In this situation the ONLY GUILTY's the JOURNALIST who was making an issue out of nothing."

I don't really understand about that issue though...Knetz are over reacting They came there wearing masks... it's a karaoke of course they'll take off their masks to sing...and if going to that kind of places is not allowed then first of all why is the karaoke open??..They don't need to say sorry for that...and they don't need to cry over thatLee Hyori and Yoona We love you

[TW] Person claiming to be Hyunjoo's little brother says she left April because she was bullied by the members to the point where she got suicidal
1 day ago   99   38,890