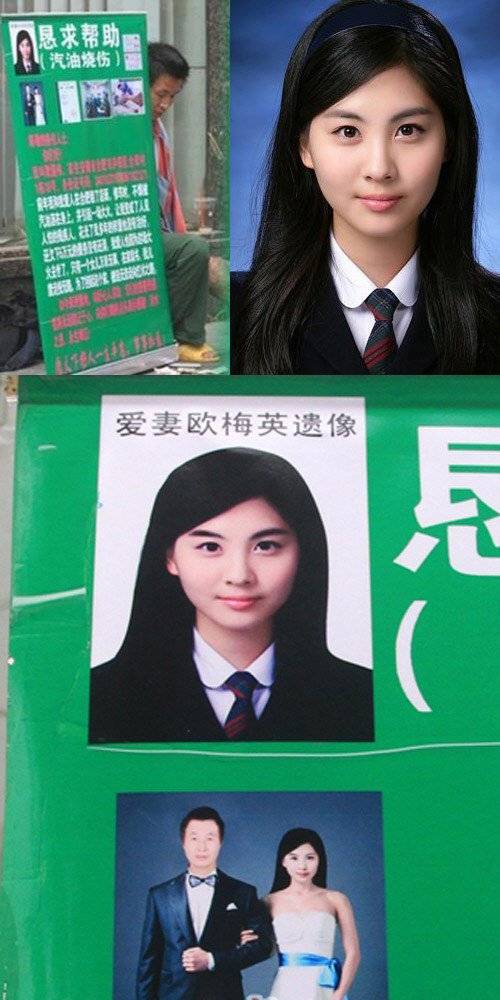 Of all the ridiculous happenings in the world of K-pop, the latest news that's become a hot topic among netizens involves Girls' Generation's Seohyun and a homeless man in China.

Seohyun was spotted on a poster put up by a homeless man on the streets of Nanchang, Jiangxi, and photos of the scene have been posted online. In order to gain pity and receive donations, the man claimed that the unlikely pair had been husband and wife until Seohyun passed away.

Taiwanese media outlet NOWnews reported, "There's a homeless man on the streets of Nanchang, Jiangxi, China that uses Girls' Generation's Seohyun's graduation photo on a sign and puts on a serious expression to beg for money." On the poster, the homeless man claims that his "wife" died in a fire 2 years ago and that he suffered extreme injuries. He adds that he's begging in order to feed their daughter and his family.

The news spread online with netizens having mixed reactions. Though many fans found the entire thing hilarious and ridiculous, there were also those who were angry that Seohyun's image was being used in this manner.

Sung Hoon talks about the truth behind the dating rumors he was embroiled in
2 hours ago   1   5,070

The reason why Super Junior's Heechul is always praised every time there is news about a celebrity DUI
2 hours ago   8   17,371

Fans laugh as (G)I-DLE's Shuhua accidentally puts up her middle finger during a performance
5 hours ago   8   9,351

BTS's "Dynamite" awarded the 'Foreign Work Award' by the Japanese Society for Rights of Authors, Composers and Publishers (JASRAC)
29 minutes ago   0   143

Netflix drama 'Hunting Dogs' might have to refilm due to the recent DUI incident involving cast member Kim Sae Ron
49 minutes ago   3   2,295