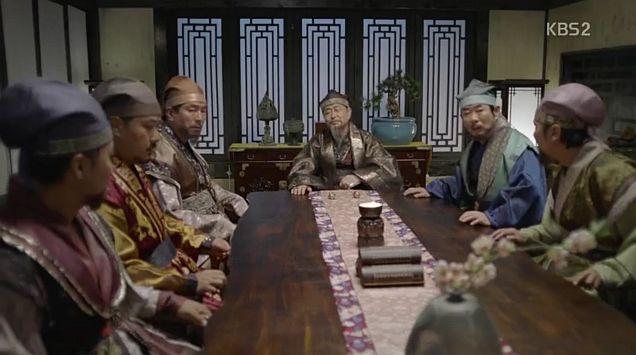 "Now that we've decided on a game, who wants to deal?"

Moo Myung steps forward and claims he is king to prevent Ah Ro from being executed. The Crown Prince relents and parlays with him. A duel is proposed for the safety of Silla and the hostages, and the two contestants throw dice the night before to test their luck. Moo Myung and the Crown Prince duel, with Moo Myung pulling it together at the last and humbling the Baekje noble. At last, we see that the Crown Prince's roll was lucky, but Moo Myung's was even luckier. But Ah Ro is still jailed. The Crown Prince claims they were not part of their deal. So the Hwarang knock out the guards and spring the prisoners. But their victory is short-lived as the Crown Prince, his general, and the guards give chase, felling many prisoners and Soo Ho with arrows. The Crown Prince appears to have the upper hand until the Master Trainer appears with a Hwarang contingent. Wi Hwa tells them they've crossed the border and to leave. Now. They wheel about and retreat, promising to kill Moo Myung another day. Back at Hwarang House, they celebrate their victory, while Moo Myung admits that it was hard for him to ignore Ah Ro, and wanted to hold her badly. They mend fences with a kiss...

Now we get an episode that has some serious epic-ness to it. We don't just get one battle, we get three of them. In succession. I love the initial duel best. The one with the guards was a little awkward as they used blunt weapons and the guards fell with one hit to the head. Yes, even the ones with helmets. I'm guessing you can claim the helms stopped them from being seriously injured by a hit to the head, but I'm not strapping one on and letting them hit me to test that theory. Still, it was absolutely thrilling to watch, not letting up until the end. 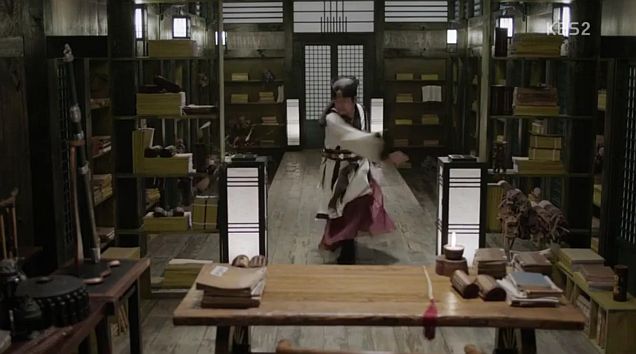 Speaking of which, I was not too much of a fan of the denouement. It was okay, and Minister Park got his comeuppance, but I was still a little letdown. It was kind of a switch from the epic slow mo, the dramatic crescendos of the music, the desperate fights for survival, and just the bulk of the episode. Obviously, you need a way to come down from the adrenaline-soaked climax, but I felt this was not the way to do it. But I did like the very end -- a kiss, helping seal the romance deal.

And this episode had me asking myself "why not kill him?" There were several instances where Moo Myung could have. When the Crown Prince was humbled after the hand-to-hand fight, he could have grabbed him by the topknot and smash him against the concrete. When he had the blade against the man's throat, he extracted a promise from him. Would the bargain have died with him? But the simple act of eliminating the general and the Crown Prince would have prevented the chase at the end. There's integrity to consider -- but if Soo Ho had died that would not have been okay, and a very different lesson would have been taught. 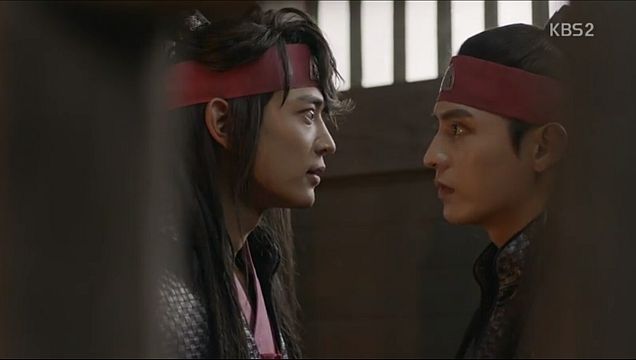 "What do you mean the salsa's not free? I paid for the meal, I should get the chips and salsa free!"

Speaking of the fights, they recovered awfully fast, didn't they? I mean they're riding off. True, it's not a punishing pace for the horse, but anyone who's been astride a cantering horse knows that the ride is not an easy one. Any stitches Ah Ro had applied would have ripped open and bled anew. Not to mention that it seemed as if both of them were at death's door. Yet, in the middle of the night, Moo Myung is awake, totally healed and ready for action. I realize he's the hero, but it could have been made a tad more believable.

And we get another annoying "you don't know who Moo Myung is" teaser. Quit teasing us and tell us already! I'm really curious. Is he really the king and Jinheung/Ji Dwi was set up as a decoy? And does the Queen know? I know that the suggestion has been put forth that he indeed should be king, but what if he actually is, by virtue of birth? What if he has the royal bone, and is in actuality a noble in line for the throne? It's amusing to see the reactions among the Hwarang when he claims to be king. 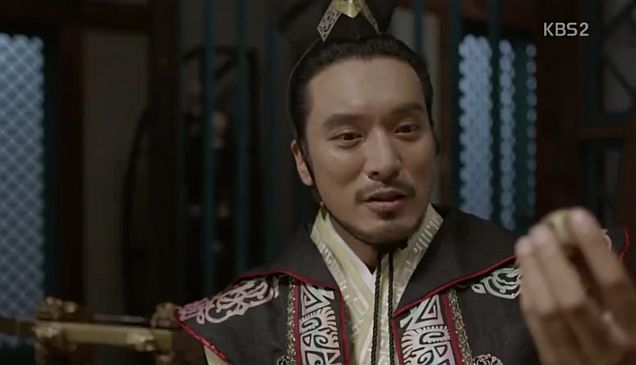 Overall, it was a pretty strong episode, even there were a few WTF moments. For the most part, it was highly enjoyable, and I was able to lose myself in the battle scenes enough to forget most of the awkwardness. It was really afterward when I began to think of these things. Probably the curse of the reviewer. Still, they delivered a solid installment, and I'm happy that I get to see another one today.