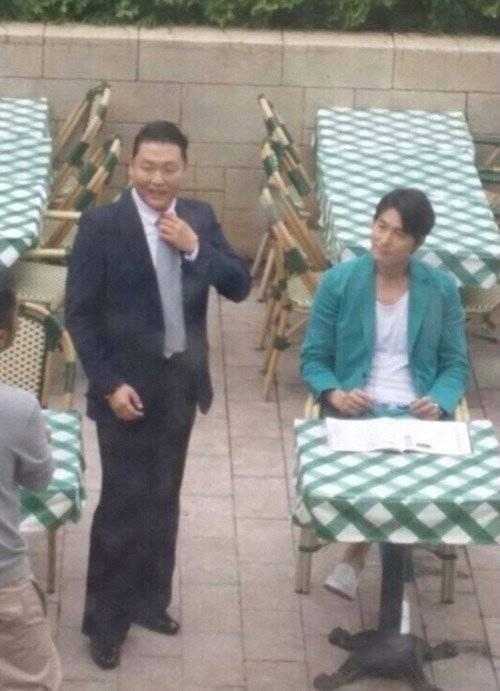 The news made its way around when a photo of the two spread online. In response, Jung Woo Sung's agency Red Brick Entertainment rep confirmed to TV Daily on the 8th, "Jung Woo Sung filmed a cameo for Psy's 'Daddy' MV on the 7th."

Psy's rep also told Ilgan Sports, "The MV filming was completed this morning (8th) and will be released once it has been edited. The release date is undecided... Jung Woo Sung filmed [a cameo for] Psy's 'Daddy' MV at Everland in Yongin, Gyeonggido on the 7th... It was supposed to be filmed in secret but the photo was leaked by a staff member. It was supposed to be a surprise so it's regretful. Jung Woo Sung and another guest [will make a cameo]."

Another YG Entertainment rep revealed to Newsen, "Jung Woo Sung, Hwang Min Woo, and CL will be appearing in this new music video."

'Little Psy' Hwang Min Woo was already reported to be the other guest star on Psy's "Daddy" MV, and now that 2NE1's CL's appearance has been mentioned as well, anticipation is rising even higher for the upcoming video.

Model Park Young Sun reveals a time she was humiliated by an idol group manager
16 minutes ago   0   1,013

F.T. Island's Hongki opens up about his hobbies + reveals he is currently working on a song for his group on 'Jessi's Showterview'
52 minutes ago   0   260

Hyunjoo reveals she has been sued by two April members for defamation, opens up about the financial strain of facing multiple lawsuits
1 day ago   108   37,307

Netizens show mixed reactions to BLACKPINK member Rose's eye makeup at the Met Gala + wonder if it's a popular trend in the United States
2 days ago   157   70,775