Comedian Park Seul Gi made a confession on a radio show.

On May 18 KST, the comedian guested on KBS Cool FM's 'Park Myung Soo's Radio Show' segment 'I Ended Up Crying'. Alongside Y2K's Go Jae Geun, Park Seul Gi suddenly announced during the show: "I really like BTS, and recently, member Jimin came out in my dream."

"I got married to Jimin in my dream," she continued. "I like him so much that he comes out in my dreams nowadays. I fell asleep thinking about him the night before, so he came out in it."

DJ Park Myung Soo also shared that he has a lot of nightmares, but no actors or actresses would come out in his dreams because he "doesn't have a particular interest in them." Park Seul Gi's story became a joke during the show, since she is already married to a producer at an advertising company.

Do BTS members come out in any of your dreams?

Jeon So Mi excites fans with stylish 'What You Waiting For' credit poster, participates as composer & lyricist
2 hours ago   10   3,569 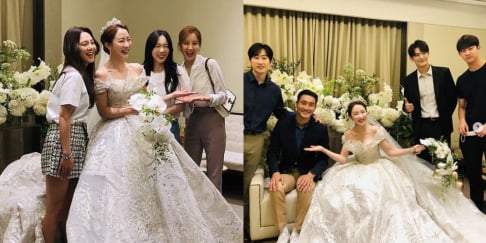 Jeon So Mi excites fans with stylish 'What You Waiting For' credit poster, participates as composer & lyricist
2 hours ago   10   3,569

#Bighit trending on Twitter after Army fans become angry with a songwriter for "discrediting" the artists
6 hours ago   53   29,238

Netizens talk about YG Entertainment's new boy group that is debuting with a large number of members
10 hours ago   53   19,193

Tiktok is apparently deleting accounts that belong to Korean celebrities
7 hours ago   34   47,936