Taeyang reveals why he went shirtless for his comeback, shows love for Haru & more on his guerilla date 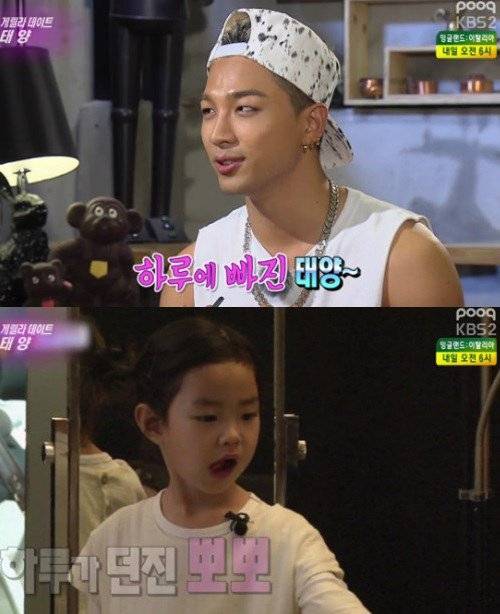 Taeyang revealed why he went shirtless for his comeback, his love for Tablo's daughter Haru, and more during his guerilla date!

On the June 14 edition of KBS 2TV's 'Entertainment Relay', the reporter asked why he went shirtless this time around and Taeyang explained, "I kept hearing from those around me that you look the most handsome with the clothes that mother nature gave you. So I decided to go shirtless from start to finish." The reporter joked, "[At this rate], it seems like you would do an interview in the bathhouse [shower] next time." Taeyang joked back, "That sounds like a good idea. Around four years later, I think it would be nice to [film a MV] in the bathhouse."

The reporter then gave questions using Taeyang's song titles and asked, "The song '1AM'. Who is the person you think about the most at 1 AM?", Taeyang shared, "Honestly, the person who I think about the most at 1 AM is my CEO [Yang Hyun Suk]. Because when it turns 1 AM, [Yang Hyun Suk] should come to the studio and make a decision for me. But I think about why he doesn't come and why he keeps delaying [the release of] my album."

When asked, "Which is the memory which you want to 'let go' the most?", Taeyang revealed that there are no memories he wants to forget yet but became flustered upon the mention of his role in the 2001 film 'Besame Mucho' ('Kiss Me Much'), saying that he has already 'let go' of the memory of his child actor days.

When asked, "Among the Big Bang members, are there any who do something that you think 'this ain't it' and want to expose?", Taeyang playfully teased Seungri, "To be honest, I have a lot to say. If I open my mouth, some members will have a difficult time... I heard that Seungri not only goes to clubs on weekends but on weekdays as well. Normally on weekdays, even clubs rest. But I heard that [Seungri] calls up the clubs that are on break and gets them open. I worry about him but at the same time I'm jealous of his energy. He really goes in there to listen to music."

When asked, "The song 'BODY' (directly translated to 'beautiful' in Korean). Who is your ideal type? Who is the girl in your life who you can call 'beautiful'?" Taeyang answered, "I hope you don't misunderstand but it's Haru. I think Haru is so pretty [can also mean 'lovable']." The reporter asked, "Do you love her?", to which Taeyang joked, "I think it's more than that." But when asked to choose between Yang Hyun Suk's daughter Yoo Jin and Tablo's daughter Haru, Taeyang chose Sarang!

He also hinted that Big Bang's comeback will possibly be coming soon so stay tuned for updates!

Rapper Hanhae shares how shocked he was after learning about the extravagant thank you gifts Hyun Bin and Son Ye Jin gave to wedding guests
4 hours ago   4   25,750

ENHYPEN embroiled in controversy when their bodyguards are reportedly seen assaulting female fans
21 hours ago   98   24,964