Lim Young Woong truly fixed himself as the top trot singer in South Korea. He has gained immense popularity as he has topped Melon music charts with his new album.

On May 2, Lim Young Woong's songs filled the charts on Melon music as fans streamed his songs as soon as he released his album 'IM HERO' on that day.

Some predicted that Lim Young Woong's title track would rank 1, followed by Big Bang's song "Still Life," with a few other tracks from the trot singer's new album. However, on this day, all of Lim Young Woong's songs from his new album made it to the Melon chart.

Netizens were astonished by Lim Young Woong's popularity as he made the Melon Music chart as a trot singer. Netizens commented, "His fans are streaming his songs constantly," "Melon Chart bases the ranking on the number of streams so his fans are having all his songs stream at certain times," "These older fans are amazing, lol, they're doing what idol fans do for their artist, lol," and "Wow, Lim Young Woong is really on top."

The prediction of this topic is wrong. Those were just real time chart when he dropped, it's impressive he got them all charting high, but it dropped quickly and he failed to put one single song on top 10 daily chart for May 2nd. 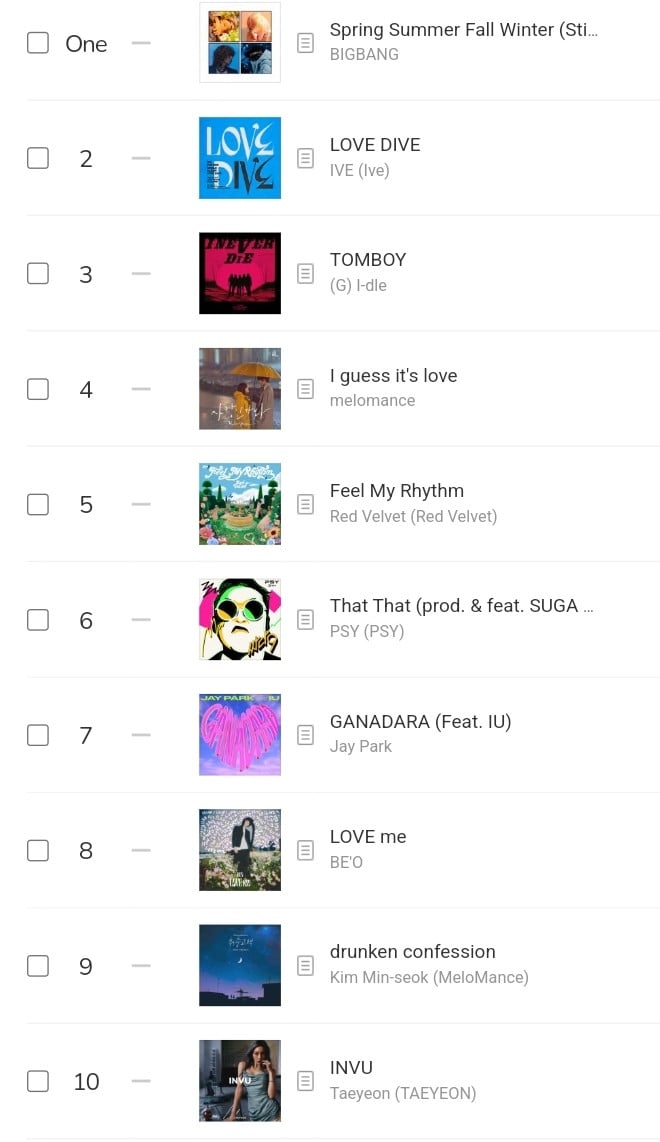 this is pretty interesting, because Still Life by Bigbang is still #1 on Melon according to Instiz

Everyone knew this girl group song at the time but it was never at the top of the charts and never won on a music show
1 hour ago   17   9,366

BLACKPINK Jennie's global fandom states they will band together to defend the idol from dating rumors
5 hours ago   65   9,825

Eli and his ex-wife Ji Yeon Soo state they are not going to live together for the sake of getting back together
30 minutes ago   1   1,895

Everyone knew this girl group song at the time but it was never at the top of the charts and never won on a music show
1 hour ago   17   9,366

Person who claims to be an airline employee confirms that BTS's V and BLACKPINK's Jennie were on a flight to Jeju together
1 day ago   193   150,151

HYBE is allegedly having private talks with Kim Garam's victim for a possible settlement
1 day ago   233   62,667