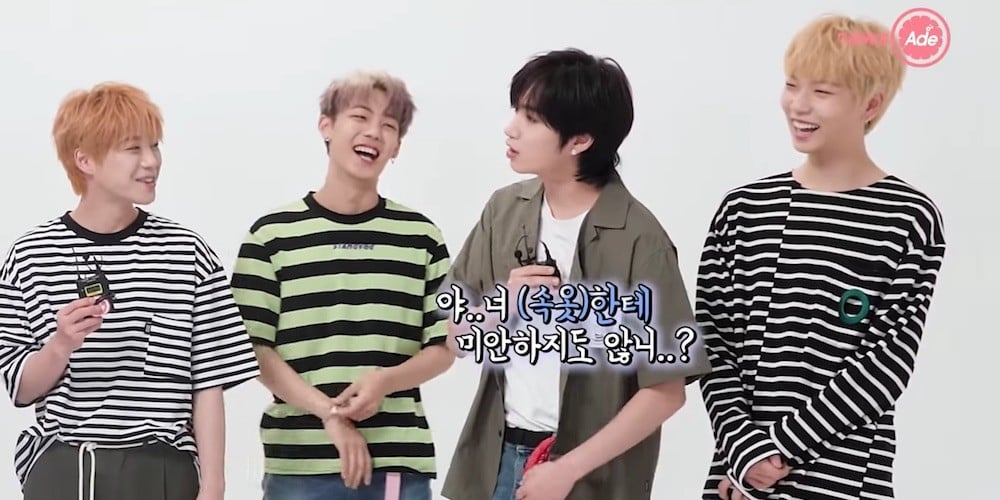 The boys of UNB had a fun 'Rolling Paper' time with online contents platform 'NewsAde'!
Each of the members were asked to anonymously write answers to the following questions about all of the other members: 1. In my opinion, this member's charm point is? 2. The awkwardness level between this member and me is what %? 3. Something you want to say to this member that you can't say normally?
While pulling out the 'Rolling Papers' to try to guess the culprit who wrote the note about themselves, Hojung found one member asking him, "This is something I felt while looking at your body... Don't you feel bad for your underwear..?"
Who was the culprit who asked Hojung the underwear question? It was Daewon! He explained, "[Hojung's] shoulders are really wide. But it turns out, his hips are as wide as his shoulders. But, hyungs, you saw it right? His underwear is so slim and tiny. Which made me go, 'Don't you feel bad for your underwear?'"
For more friendly stories between the UNB members, including which member asked Feeldog, "Please don't hit me kekeke," watch the full 'Rolling Paper' clip above!
Share this article
Facebook
Twitter
0 9,029 Share Be the first to vote

Netizens share their reactions after watching the beginning of the 'SM Culture Universe' with aespa's 'Ep.1 Black Mamba'
2 hours ago   12   5,056

2PM's Junho invites his close friend GOT7's Jinyoung over for spring cleaning in the preview for next week's 'I Live Alone'
1 hour ago   0   2,222

Netizens share their reactions after watching the beginning of the 'SM Culture Universe' with aespa's 'Ep.1 Black Mamba'
2 hours ago   12   5,056

Lee Young Ji says her voice was like Ariana Grande's when she was a kid, but it changed because she yelled too much
3 hours ago   5   1,871