"I really miss IZ*ONE," fans are speculating that former IZ*ONE member Nako is being bullied by her Japanese group members

Earlier this year, the popular project girl group IZ*ONE disbanded after two and a half years of promotion.

Many fans were disappointed and sad to see the girls go but were glad to see the members each start a new chapter in their career as many of them began their individual promotions as solo artists or with a new group.

However, fans became worried about Yabuki Nako as they believed they were finding signs that the former IZ*ONE member was being bullied by the members of her Japanese group, HKT48.

After her contract with IZ*ONE expired earlier this year in April, Yabuki Nako returned to Japan and officially resumed her promotions with the group HKT48 in May. Although she returned to Japan, Nako continued to communicate with her fans and showed her affection for her South Korean fans.

Recently, one netizen raised suspicions that Nako was being bullied by her Japanese girl group members as the former IZ*ONE member posted a message that raised the bullying speculations.

Yabuki Nako shared with her fans that she had lost her AirPods a week ago and was not able to find them until she found them in the trash can. Fans were curious why the AirPods could be in the trash can and began gathering instances the Japanese members were showing rude facial expressions to Nako or making fun of her for speaking Korean.

According to the netizen who created the post, the HKT48 members were dissatisfied when Nako would accidentally speak Korean with them while she was promoting with IZ*ONE.

The fans explained that Nako was often made fun of on talk shows for looking like a Korean idol group member. In addition, Nako has recently expressed how much she missed the IZ*ONE members stating, "I really miss IZ*ONE," further raising suspicions that she is being bullied by the Japanese members.

The netizen also uploaded photos and videos of the Japanese members showing an agitated and stern facial expression when Nako was explaining the meaning of a Korean word. The Japanese members standing behind her were seen whispering something into each other's ears and looking a bit uncomfortable when Yabuki Nako was speaking in Korean.

Other Korean netizens joined the online community and commented, "Nako should just come back to Korea and promote here," "Wtheck, a girl from that side? are they talking about Korea?" "To be honest she never had any controversy over being pro-Japanese so it would be no problem in joining a mid-sized Korean agency," "I think she's so pretty and can be successful in Korea, she should just come back here," "I was scrolling through and got really said when I saw Nako's handwritten letter saying she misses Eunbi," "Why is she suffering there being called those things," "Nako just come back to Korea," and"This can be the reasons they are bullying her: 1. Nako became bigger than them because she was part of a really popular girl group, 2. She's the center member of HKT48 right now, 3. she's a model for various advertisements, 4. She's the lead actress for a cable drama, 5. They're jealous of her." 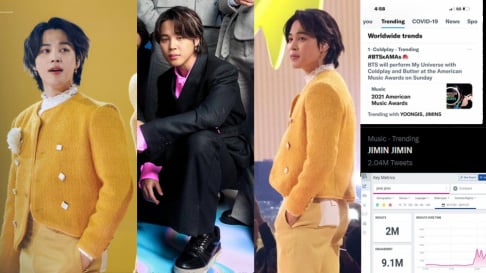 BTS' Jimin trends worldwide and on other major platforms as he stuns fans and non-fans with his visuals, vocals, and dance at the AMAs 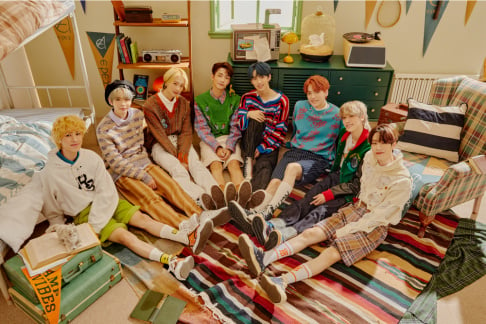 Let's not jump to conclusions.

This korean post is already deleted. Finding her airpods in the trash bin and that last thing with 1 person looking a certain way doesn't mean bullying, Nako has actual friends in HKT like Miku, also girls who already graduated are like her older sisters like Sasshi, she has ppl caring for her.

Really sick of some wizones doing such things. AND YES, it is wizones, that is eunbi's insta story. The selfish ones who pushed for a reboot without considering the girls own desires, like some litearlly want to go into acting and are done being idols, but now that Nako is back in HKT, which btw she will graduate from anyways, they write up this mess to suggest she's being bullied and izone was better. You never cared for her at all. and now are being toxic trying to take down Nako and I'm sure other girls too. All because of jealousy. Listen to your own biases, the contract was 2.5 years, everyone knew this. the future is unpredictable and the girls have their own goals like Eunbi's bucket list was releasing a solo album. So support them instead of trying to tear everyone down. The redebut groups are also going to have these dumb rumors I just know it.

Male celebrities that have the most iconic elementary school pictures
2 hours ago   3   3,242

Kang Min Kyung releases an official statement about her father who was recently arrested
2 hours ago   6   4,129

How Korean netizens are reacting to the news that Seungri will be released from prison by the end of the week
4 hours ago   42   11,028

AKP BUZZ
Korean netizens react to news of the United States shooting down a Chinese spy balloon
26 minutes ago   6   1,479

"He looks like he just finished promoting Candy," fans can't believe Baekhyun was just discharged from the military after seeing his new photos
1 hour ago   3   2,098

Charlie Puth ft. Jungkook's “Left and Right” becomes the fastest song by a K-Pop Idol to sell 1 million units in the US
2 hours ago   1   380

Male celebrities that have the most iconic elementary school pictures
2 hours ago   3   3,242

Former Lovelyz member Jin apologizes for sharing how idols date each other on her YouTube channel
15 hours ago   43   27,170