Girls' Generation's Taeyeon caught the attention of viewers with her interesting costume.

On February 11th, tvN's 'Amazing Saturday' posted a photo of Taeyeon on their official Instagram with the caption, "Have a happy new hair... I mean, new year."

In the photo that was posted, Taeyeon is wearing a beautiful Hanbok in a pastel purple color. However, it was Taeyeon's long beard that caught the attention of netizens. In the photo, Taeyeon looks joyful with her eyes wide open and a bright smile.

In particular, this is the first time that Taeyeon had wore a peculiar costume in the fourteen years of her music career after debuting in 2007. Netizens are loving the singer for not shying away from wearing such a ridiculous costume.

Netizens commented, "I'm having a good holiday thanks to you," "This is hilarious how she's wearing such a beautiful Hanbok but has a beard," "I love this girl," and "She's still beautiful with the beard."

Meanwhile, Taeyeon joined tvN's 'Amazing Saturday' as a successor to Hyeri. Taeyeon is receiving an immense amount of love from viewers as she shows off her bubbly and honest personality after appearing on a variety show as a permanent cast.

You gotta love the Dorky Leader of Dorky ShiDae

I have to start watching this show now that she is there. Seems like fun and easy going one.

Hashtag 'Wonho deserves better' trends on Twitter as fans take out their anger on social media
3 hours ago   18   4,411

Super Junior's Eunhyuk buys a luxury home for his family after hearing his mother doesn't have much time left to live
3 hours ago   11   20,696

Actor Park Ki Woong sells all 32 paintings in just three months after making his debut as a painter
2 hours ago   1   3,791 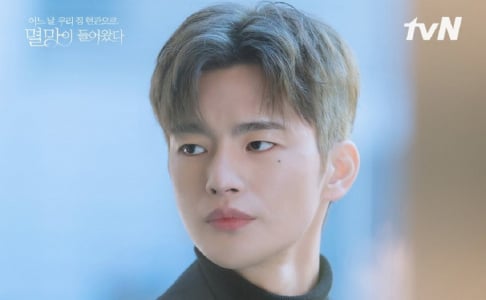