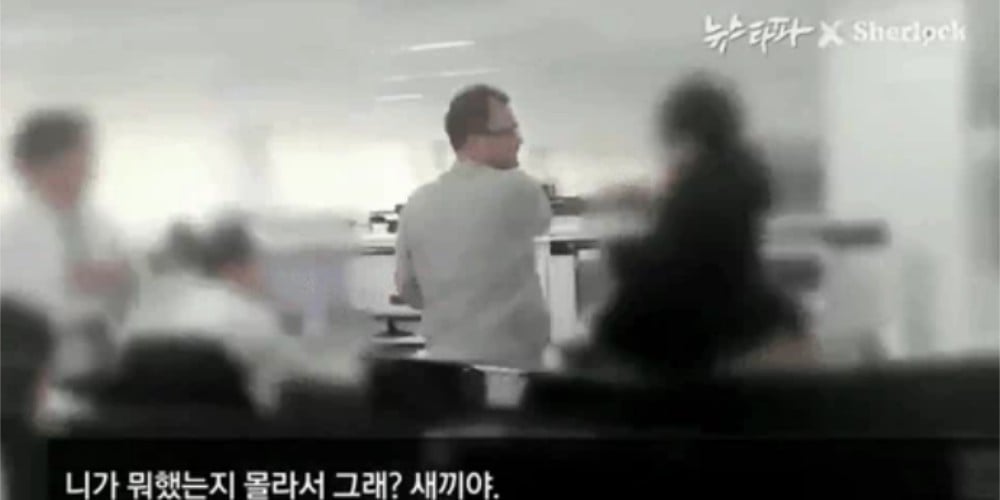 Yang Jin Ho, the CEO of K-Technology and WeDisk, is under fire for abusing his employees.
Newstapa revealed a video of Yang violently abusing a former employee at the WeDisk office in Seongnam. The video was recorded back in April 2015 by Yang himself as a "souvenir."
It's reported that the former employee was called to the office for leaving a negative review of the company. According to the former employee, the CEO tracked down his internet IP and demanded him to come to the office. He couldn't refuse or take action as he was afraid of Yang's wealth and power.
In the video, Yang is captured violently cursing and demanding an apology from the former employee.
Currently, the police are investigating the situation.
Share this article
Facebook
Twitter
97 58,061 Share 82% Upvoted

Souvenir? I will never understand that but these are the types of people who deserve to rot in jail. Send him there please Korea.

Thats what you call a tyrant! Those employees sitting right there looked like they were so afraid to even turn around. I hope they investigate him good and hope other employees come forward who have been victimized by him. S**t in america the former employee would show up the next day with a gun and thats the end of that boss, not that thats a good thing but damn.

Lady Gaga talks about the positive experience she had working with BLACKPINK on their new song 'Sour Candy'
7 hours ago   58   15,000

Jo Yoon Hee's label confirms she has come to a divorce settlement with Lee Dong Gun
15 minutes ago   1   1,663

Lady Gaga talks about the positive experience she had working with BLACKPINK on their new song 'Sour Candy'
7 hours ago   58   15,000

Fans think Lady Gaga will release a music video for 'Sour Candy - ft. BLACKPINK' on June 2nd after her Instagram story and Jisoo's hint
7 hours ago   17   9,844

TWICE will pre-release the highlight part of More & More exclusively through TikTok
15 hours ago   3   1,170

Netizens wonder what mysterious connection these two idols might have had in their childhood
21 hours ago   12   20,137

BTS Jimin trended worldwide after he shared a photo of his custom-made shoes on Twitter!
17 hours ago   21   6,378