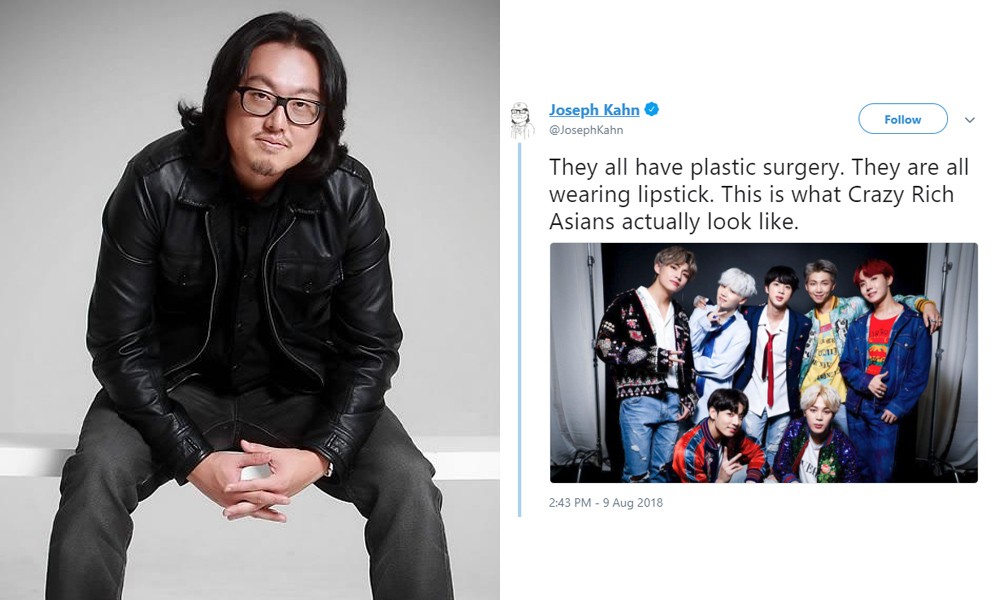 Famous Korean-American MV director Joseph Kahn is under fire for his remarks about BTS.
On August 9, Joseph Kahn shared some controversial thoughts on Twitter. With a photo of BTS, he tweeted, "They all have plastic surgery. They all wear lipstick. This is what Crazy Rich Asians actually look like."

They all have plastic surgery. They are all wearing lipstick. This is what Crazy Rich Asians actually look like. pic.twitter.com/u8ruEsYb7R

[SEEALSO]https://www.allkpop.com/article/2015/07/director-of-taylor-swifts-bad-blood-mv-denies-copying-2ne1-and-calls-out-writer-for-misleading-article[/SEEALSO]
The tweet was met with heavy criticism from many BTS' fans who defended the group. Fans responded that none of the members had plastic surgery and the members had to work hard to get where they are today. In reality, hey'ret nothing like the 'Crazy Rich Asians' portrayal. However, Joseph Kahn continued to share his thoughts.

Asian Americans: STOP FEMINIZING OUR MEN. ASIANS ARE MACHO TOO.

Asians: YOU NO WEAR LIPSTICK? WHY? https://t.co/DmJWP9vZHl

This is not the first time Joseph Kahn has stirred up an issue in K-Pop. Back in 2015, he was accused, and heavily criticized for copying 2NE1's "Comeback Home" MV for Taylor Swift's "Bad Blood" MV. He strongly denied the plagiarism accusations and called out writers for "misleading articles".
Share this article
Facebook
Twitter
1 147,952 Share 64% Upvoted

This Joseph Kahn in an insecure little bitch has-been.

AKP BUZZ
Korean citizens give out free masks to foreigners at the beaches in their attempt to prevent the spread of COVID19
9 hours ago   36   8,422