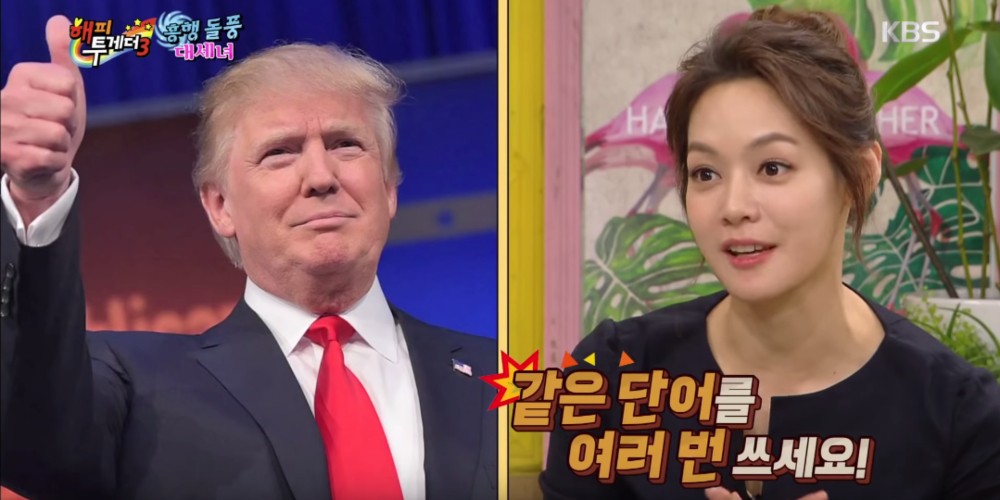 Interpreter Ahn Hyun Mo named President Donald Trump as the most difficult person to translate.
On July 5, Ahn Hyun Mo, Park Kyung Lim, Jessi, and Kim Ji Hye guested on KBS' 'Happy Together 3'.
Ahn Hyun Mo, who went viral for her smooth translation of grand events such as the '2018 Billboard Music Awards', the US-North Korea summit, and more, was given various questions about her translation experience.
One question asked if it was difficult for her to translate the American pop stars' slangs at 'BBMA'. Ahn Hyun Mo answered, "I didn't have many difficulties during 'BBMA'. I actually had a hard time during the US-North Korea summit."
She explained, "I translated Trump multiple times. He uses the same vocabulary over and over again." She named the phrases "great" and "a lot of" as examples. Ahn Hyun Mo continued, "If the interpreter translates that directly then he will sound like an elementary kid. So I try to vary the words, like 'fabulous', 'good', 'fantastic' (for each time he says 'great')."
Share this article
Facebook
Twitter
0 48,615 Share 100% Upvoted

Salt Entertainment says that they plan to work with Kim Seon Ho until the end, with 1 year left in their contract
7 hours ago   26   27,129

Anonymous netizen who claims to know Kim Seon Ho and his ex-girlfriend announces plans to unravel the 'truth' behind the controversy
2 days ago   112   172,109