People online have been going up in arms regarding the latest disconcerting news surrounding Big Bang's Taeyang, who allegedly posted something racist on his Instagram.

What may have just seemed like a harmless Lunar New Year greeting to Taeyang ended up upsetting more people than he could have possibly imagined. Using an app that allows you to wear the 'face' of anyone you desire, Taeyang glamoured himself as Kanye West and proceeded to wish his fans a "happy monkey new year."

People have taken great offense at Taeyang's attempt at mimicry of the famous rapper, calling him out for being "racist." Bombarded with backlash subsequent this posting, Taeyang immediately removed the problematic clip and wrote an apology.

However, the damage already seems to be done. People online have already saved the clip from Taeyang's Instagram, and have circulated it on various corners of social media. We can only hope the backlash won't be enflamed any more than it already is.

What are your thoughts on this issue? Did Taeyang go too far with this joke or are people overreacting? 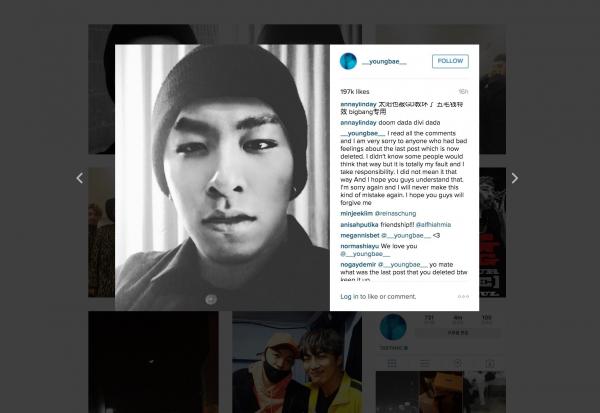 How is this not better viewed, this is so disgusting.