Kim Hyun Joong's ex-girlfriend Ms. Choi stated in an exclusive interview with Dispatch that she will not be marrying the idol star and actor despite her reportedly confirmed pregnancy. She also revealed text messages between herself and the SS501 member, sharing her side of the story.

As previously mentioned, after ex-girlfriend Ms. Choi's lawyer confirmed she was pregnant, Kim Hyun Joong's agency clarified that he and his family's intention was not to assert she was faking her pregnancy but to check the condition of Ms. Choi and the baby as well as consult her family about the issue. KeyEast Entertainment then stated that Ms. Choi did not appear at an agreed hospital appointment between both parties. Her lawyer followed up by denying that Ms. Choi made a promise to appear.

The content of the Dispatch interview is as follows:

Ms. Choi stated, "I don't understand myself either," commenting on why she decided to meet the man who she herself reported for physical abuse once again. She's also aware and understanding of the public's negative opinion of her and her pregnancy. As for the baby and any plans for marriage, Ms. Choi said, "I'm going to take responsibility for the baby. I will never marry Hyun Joong."

On the topic of Kim Hyun Joong and his family wanting her to prove the pregnancy, she responded, "Hyun Joong has never been suspicious of the pregnancy. He himself knows best whether I'm pregnant or not. He's the one who said he thinks he made a mistake first." She also shared that she decided to reunite with him in November of 2014, and they were together until the new year, spending the last two weeks of November on Jeju Island.

Ms. Choi also stated that despite their initial breakup, Kim Hyun Joong sent her a birthday and flowers and showed up to see her drunk, resulting in a change of heart for her. She also commented that KeyEast Entertainment is trying to portray her as a calculating gold digger and causing a public fight. Ms. Choi then said that neither she nor Kim Hyun Joong expected the pregnancy, and both were confused by the sudden news as they had decided to end their relationship.

According to Ms. Choi, when she met with Kim Hyun Joong's father on January 6 of this year, the elder Mr. Kim made it apparent that he didn't want her to have the child, and Kim Hyun Joong apologized for his father's attitude. As for why she didn't meet with his parents for a hospital appointment, she explained that she felt pressured to go to a particular hospital and doctor, and because of the discomfort, she didn't give an answer and went to the hospital of her choosing.

Ms. Choi also suggested that the reason she and Kim Hyun Joong broke up after their trip to Jeju Island was because he was seeing another woman. She stated that she found the woman's items in his bag.

She concluded that though she's aware of what KeyEast Entertainment was protecting, both the agency and Kim Hyun Joong have marred her name. By taking this interview, Ms. Choi stated that her intention as a future mother was to clear her name and take responsibility for her child.

Below is a transcript of the revealed text messages:

September 7, 2014
Kim Hyun Joong (K): Have you run of beauty products yet? I only see things like that when I get on the plane. It seems about time that your makeup supply's gotten low.
Ms. Choi (C): I have everything. Why are you acting like you've always taken care of me?
K: You're talking like that again. I thought maybe you used everything you had before.

C: This isn't the time for you to be taking care of my beauty supplies.

K: It's nothing. It's not hard to do that for you. You miss me, right?

K: Really? Not even 1%? I still miss you. I think I'm crazy. It's the end now? My heart isn't ready yet. I want to prepare what I want to say and meet up with you. If it's really the end, I want to do everything for you that I couldn't before.

K: I really hope that you'll be happy. There will come a day when we can't even contact each other. Still, before then. At least keep in contact with me.

K: I sincerely congratulate you on your 31st birthday. I hope that at least today is a happy day for you and you receive a lot of blessings. I'm always sorry to you.

C: Flowers, I got flowers.

C: I like them. They're pretty, but you're not here.

K: I'm sending them because I'm not with you. Still, it put you in a good mood, right? I didn't write who sent them because your parents could've received the package. Just say a friend sent them to you.

K: I don't think this is going to end well. I'll take care of it myself now. You live the way you want.

C: Okay. Then let's go our separate ways, and take no interest in each other.

K: Okay. Let's go our separate ways. This is the end. But why are the dogs in this neighborhood like this? I got angry, but I have no one to send these photos to. I thought about it and send them to you. It's so funny.

K: The rain stopped, and the sun is out. Make sure to eat well.

K: Me too. It should be something to be happy about. I'm upset. Sorry.

C: I understand how you feel too. Though I wish it wasn't like this.

K: I'm so confused. When I get back from the army, the baby will be two years old. What to do then. Everything is tying me down.

K: Did your ultrasound go well? I arrived at the airport.

C: Yeah, they said next time I can hear the heartbeat.

K: I see. Make sure to eat well, dress warmly, and don't drink. The hospital says it's 5 weeks?

C: Yeah. Almost 5 weeks. I'm still nervous and can't process this, but.. it must be the same for you.

K: I'm so upset that I can't even congratulate you. Even in a tough and painful situation like this.

K: Let's tell our parents later. I thought about it a lot, and it's still hard for me to handle. I need to think about it more. Please understand.

C: It's hard because you keep changing your mind.

K: I've never changed my mind. It's not like I can't go to my military service. I can't even see the baby grow. Marriage is not something you can do alone. I want you to think about it carefully too.

C: You won't be able to see the baby grow up anyway. You're considering throwing the child away or not, so what can I say about that.

K: Did I say I was going to throw it away? I'm going to raise it. Don't you think we should talk about getting married though? I don't understand getting married just because a baby's being born. I think everyone might be unhappy if we live that way.

K: Okay, I'll marry you, but file a petition for me. Your husband is about to get a red line across his name.

C: What are you talking about?

K: If I get fined like this, I'll receive a red mark. If I'm found guilty, my agency says I'll be considered a criminal.

C: You're saying you want to get married not because of me or the baby, but because you don't want to be a criminal?

K: No, I want to live the best I can if at least for our baby. I don't want to be pulled around by something like this again. Let's forget everything and start from the beginning. I'll do my best. I'll marry you and make you happy.
C: You should do well. Why are you suddenly being like this though?

K: I want to treat you well. I want to do well for you and the baby. Take care of the baby well, while I'm in the army.

K: I'm going to bed now, but I have to say something first. I know you don't like A [undisclosed name], but it's embarrassing from my point of view. Don't you went overboard by sending women's products in the mail?
C: Is she in her right mind to leave something like that at a man's house? I just sent whatever was at your house. How do you think I felt when I saw those?

K: How is the baby? I want ot know. Let's talk when I get to Korea. I want to see my child.

K: It's so big now, and it's moving. Is your hospital the same one? Send me the most recent video.

C: [Ultrasound photo] The video where it's kicking is the most recent one.

K: How are you feeling? Are you at home? Don't move around too much.

C: Can you see the baby's nose by its side profile?

C: The hands and feet are moving too, but the videos aren't sending properly through text message.

Kim Hyun Joong's father (KF): If we do things one step at a time, there will be no problem. Don't worry and come over with your parents. Confirm your pregnancy, and let's work it out.

C: I've already sent over the pregnancy confirmation and ultrasound on February 14. Why are you insisting on that one [hospital]? I can show [the proof] to you at a close place or anywhere else.
KF: I can't believe you based on just an ultrasound photo because you've proved yourself as untrustworthy to us. I'm wondering what reason you have to change words around so strangely.
C: I've never wanted that doctor. I'm scared that something will happen to my baby. You asked to see the documents, so we met and I showed you everything. I don't understand why you're doubting me. I think any hospital should be fine.

What are your thoughts on this ongoing drama? Did this interview and text message exchange change your mind about anything?

Legal representatives from Cube Entertainment to meet up with school bullying accuser 'A' in person today
2 hours ago   14   5,110 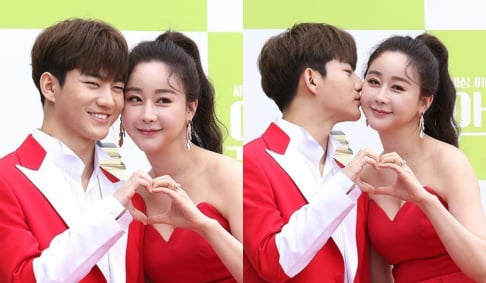 Legal representatives from Cube Entertainment to meet up with school bullying accuser 'A' in person today
2 hours ago   14   5,110

"V was my service boy," Netizens revisit the streamer who confessed that he bullied BTS's V when they were in school
1 day ago   88   83,481