BoA snaps a picture with Pope Francis after their luncheon 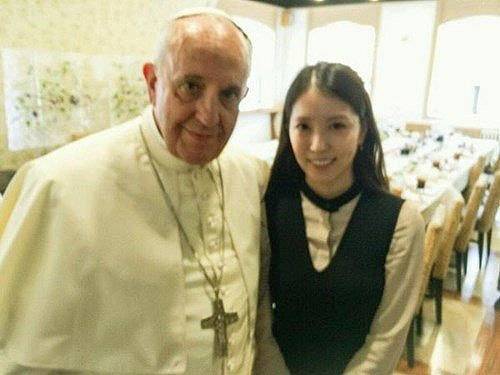 As previously reported, talented Korean singer BoA, as well as twenty other young leaders all over Asia, shared a luncheon with Pope Francis himself at a Catholic university in Daejeon on August 15. She was given this great opportunity as the honorary ambassador of 'Asia Youth Day.'

Afterwards, they snapped a sweet picture to freeze the moment in time.  Later this day, she stood on stage for the 'SM Town Live World Tour' and said, "Today was deeply meaningful for me.  I was told to relay courage and hope through song to everybody from hereon."

"He needs to practice more," Netizens aren't impressed after hearing Kang Daniel's live performance on 'The Show'
4 hours ago   45   13,937

Netizens pick the idol members who dance well with steady vocals during live performances
6 hours ago   90   17,202

This singer is gaining attention for his unrecognizable transformation after dieting
4 hours ago   5   10,550

BTS fans tweet the hashtag #SoloStansOUT as they express how tired they are of some fans supporting only one member
2 hours ago   65   6,274

Netizens pick the idol members who dance well with steady vocals during live performances
6 hours ago   90   17,202

Designer decides to pull BTS Jimin's hanbok entry from charity auction after the constant harassment by Akgaes
11 hours ago   130   10,035