Singer Kangnam revealed how he did on his first attempt at South Korea's naturalization exam on the latest installment of his YouTube series, 'Neighborhood Friend Kangnam'!

First, Kangnam opened up his video by explaining to viewers that he would be taking his naturalization exam to earn Korean citizenship in about 20 days. Kangnam, who is Japanese, decided to live permanently in South Korea after marrying his wife, Olympic speedskater Lee Sang Hwa, in October of 2019.

Opening up his study booklet, Kangnam began with the easy-level practice questions, which asked, "What do you say when you are greeting another person for the first time?" Reading this practice question, Kangnam laughed and said, "Is this a joke? I don't think I need to study after all. I think I can pass this. It's more like, if I fail, it would be so embarrassing."

However, when he moved on to the hard-level practice questions, Kangnam's confidence immediately deflated. One question asked, "Which of the following is a place where the king would live and carry out his royal duties?". Reading this, Kangnam remarked, "What do I do? I don't know stuff like this." He then tried to quiz his filming staff, changing up the answers jokingly.

Finally, when the day of the exam came, Kangnam greeted viewers with, "In truth, yesterday, I was not feeling well. I was vomiting. I was supposed to be studying, but my condition was just terrible. Still, I will do my best to read through the questions carefully."

An hour later, Kangnam emerged from the testing facility. He said, "It's way too hard. I'm 100% sure I'm going to fail. It was so hard, I had a mental breakdown. I got all of the questions mixed up. I bet it's difficult even for Korean people."

In the end, it was revealed several days later that Kangnam did, in fact, fail his first attempt at the naturalization exam. However, he assured viewers that he would try again soon, stating, "There are two more tries left."

His family could have registered him as Korean. But they didn't. It was their choice. And now, I want to cheer every his moves. It doesn't matter he's Japanese or Korean.

isnt Korea supposed to be a 1st world country and a leader? How can a half korean have to get a naturalization citizenship? He should be one naturally from birth

Fans notice BTS' J-Hope is wearing a shirt that advocates for safe sex in his latest Instagram post
34 minutes ago   3   5,109

Netizens feel bad as BLACKPINK's Jennie continues to get terrorized on Instagram after BTS's V accidentally followed her
20 hours ago   335   90,944 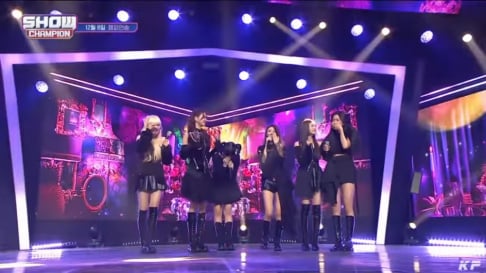 Fans notice BTS' J-Hope is wearing a shirt that advocates for safe sex in his latest Instagram post
34 minutes ago   3   5,109

Netizens feel bad as BLACKPINK's Jennie continues to get terrorized on Instagram after BTS's V accidentally followed her
20 hours ago   335   90,944