The agency announced, "First, we would like to thank fans for their love and support toward bugAboo. We would like to deliver an announcement regarding bugAboo's group activities. After debuting and striving forward with the love of fans, bugAboo will officially wrap up group promotions as of today. Through a deep and lengthy discussion between the agency and the members, it was decided that the contracts of all six members would be terminated."

Many fans were disappointed after hearing the news of the group's disbandment and left their opinions about the matter in a popular online community.

Many of the fans wished the girls luck and hoped that they would be able to debut again with a new girl group, especially Choyeon, a former contestant on 'Produce 48.'

Fans commented, "They weren't that bad, it's too bad they disbanded," "COVID restrictions were lifted, they should have waited out longer," "In-person performances are possible now, the agency gave up too quickly," "BugAboo wasn't too bad, it's so sad," "What will happen to Choyeon?" "I wish Choyeon debuts with another group," "I feel so sad," "Poor girls, I feel bad for them," "Better to disband early than disband late with nothing," "They were rookies too," "Choyeon and Eunchae," and "I really hope Choyeon debuts again." 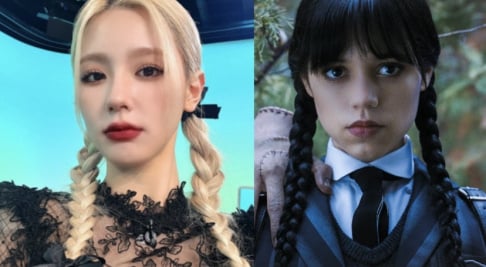 And better not with TripleS

She had too much potential

ah yes Choyeon I also wish her the best of luck despite the tough circumstances she is after having to wait years to debut. She was lowkey my favorite at the start of Produce 48

Man shot and killed during armed robbery at a restaurant in Seattle, Washington earlier this month identified as the father of singer Sam Kim
21 hours ago   99   114,477

EXCLUSIVE
[INTERVIEW] "I’m constantly looking for ways to improve myself," Henry Lau dives deep into his musical journey, his new single 'Moonlight,' and more
8 hours ago   0   1,480

Man shot and killed during armed robbery at a restaurant in Seattle, Washington earlier this month identified as the father of singer Sam Kim
21 hours ago   99   114,477