Actor Nam Joo Hyuk once again denied the rumors of school bullying and explained that the claims made by the second victim are groundless.

However, this time the agency did not respond by stating that it would take strict legal action. Management SOOP has only stated that the claims made by the second victim are "groundless," which is a subtle change in attitude in responding to the allegations compared to the first alleged victim.

On June 29, the management explained, "The second allegation against Nam Joo Hyuk on school violence that was raised the previous day is groundless." In regards to the details of the allegation, the agency stated, "We have nothing to say about that. As of now, we maintain the position that it is groundless. That is all."

Previously, Nam Joo Hyuk's agency announced on June 20th that it would take strict legal action just two hours after the first allegations of school bullying were made. Then it was reported that the agency filed a criminal complaint against the accuser four days after.

The sudden delay in responding with a legal action seems to be because the second victim's statement is quite detailed and clear. The first accuser initially revealed that they had suffered from school violence by Nam Jo Hyuk for six years. However, after the legal action was taken, he stated that the bullying occurred to his friend.

Currently, the public opinion on the matter seems to also shift as the second alleged victim also claimed that Nam Joo Hyuk's agency did not check the facts and hastily filed a lawsuit. Now, there are many netizens who are posting comments on Nam Joo Hyuk's social media, asking for a clear explanation of the school violence allegations. 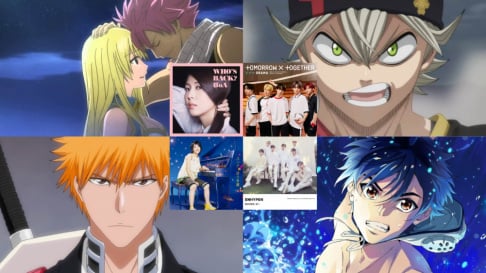 Anime OSTs featuring some of your favorite K-Pop Artists

"This is what they call the weight of the crown, right?" Why BTS's Kim Taehyung ignoring the crowd at the airport shouldn't even be an issue

Why do people not realize they are in the midst of litigation.. they will be limited in what they can and will say. Some people need to learn how the legal systems work. Seriously. As for the 'detailed' information that means nothing. I can write anything even some long winded story with 'details' and I have a friend that can cry on demand. The only thing that matters is the actual facts that are provable in a court of law. Not just hearsay by some randos on the internet. And we already know he first accuser changed his story when confronted about his allegations. So people should wait for things to shake out in court.

BTS's J-Hope reveals how Kim Taehyung was the most supportive during 'Jack in the Box' promotions and Lollapalooza
2 hours ago   11   3,896

The cast of 'Extraordinary Attorney Woo' spotted at the airport heading out to Bali for their reward vacation
21 minutes ago   0   1,081

Is BLACKPINK coming to your area? Check out the dates and locations of BLACKPINK's upcoming 'BORN PINK' world tour
1 day ago   69   47,082

Red Velvet's Yeri responds to a controversial YouTube channel which accused her of having 'Jennie Disease'
2 days ago   67   126,072