While it is relatively rare to find celebrities who are actually related by blood, these celebrity siblings prove that probably, some things indeed run in the blood! Here is a shortlist of some of Korea's most famous siblings who took the path of working in media and entertainment.

Former member of Girls' Generation, Jessica, and f(x) member, Krystal, are absolute sister goals as both are exceptional idols who both made marks in their own groups and stood out with their amazing visuals! They are also excellent actresses with considerable amounts of dramas in their filmography.

Adorable and equally talented sisters, TWICE's Jeongyeon and Gong Seung Yeon are surely one of the most famous celebrity sisters. While both trained as idols, they took different paths; Jeongyeon, the ever-valuable member of TWICE, and Gong Seung Yeon is now an actress- both reaching greater heights. They have also hosted Inkigayo together alongside actor Kim Min Seok.

Former number of IZ*ONE and now soloist and idol-entertainer Choi Ye Na and former member of Coed School and SPEED and now actor Choi Sung Min are lovely and equally talented siblings. They are also very supportive of each other's careers!

Probably one of the most famous siblings, AKMU or Akdong Musician, consists of sibling pair Lee Chan Hyuk and Lee Su Hyun. The duo won SBS' K-Pop Star 2 and then debuted under YG Entertainment. The pair won awards together, and they also received recognition and success individually.

The next pair of siblings are both fantastic at acting! Kim Tae Hee is considered to be one of Korea's most beautiful and excellent actresses, while her brother Lee Wan is also known for being great at acting; he began his career after starring in a music video with his older sister. Both of them took part in the hit K-Drama, Stairway to Heaven.

Brothers Gong Myung and Doyoung are celebrity siblings that ooze talent and visuals! Gong Myung is a member of 5urprise and an exceptional actor in all of his dramas and movies, while Doyoung is a member of NCT and its other subunits, NCT U and NCT 127, aside from his stints as a drama and musical actor.

Chanyeol, rapper, singer, songwriter, producer, actor, model, and a member of the famous boy group, EXO, and its subgroup EXO-K and subunit EXO-SC, has a sister working in the media industry! His sister, Park Yoora, is a news anchor and TV reporter for CBS. She was featured in the Herald April for her work as a presenter.

Choi Soo Young is a member of the legendary girl group, Girls' Generation and an actress who has made marks with her multiple roles. Her older sister, Choi Soo Jin, has acting talent running in her genes too, as she has been a voice and theater actress for a long time.

Big Bang's singer, songwriter, and dancer and dubbed Korea's Prince of R&B, Taeyang, has an older brother who also shared the same path of working in the entertainment industry. Dong Hyun Bae, is an actor who has extensive filmography and experience in television and musicals.

The next sibling pair are both notable rappers in their respective groups, both record producers, singers, and songwriters! Zico, the leader of the hip-hop boy group Block B, is the brother of Taewoon, a former member of the boy band Speed and pop group Coed School.

The beautiful and talented sisters, Lee Chaeyeon and Lee Chaeryeong, have been together in their journey toward being successful idols. They both joined K-Pop Star 3 and SIXTEEN, and despite their elimination, they eventually debuted separately in other groups, Chaeyeon being in IZ*ONE and Chaeryeong in ITZY.

An exceptional family, Huenings have all three of the siblings being in the entertainment industry, all having experienced becoming idols, and are all musically inclined like their father. Lea Navvab Huening, known as Lea, is the main dancer, the vocalist, and the maknae of VIVA, currently an influencer and model. The middle child, Huening Kai, is presently an all-rounder member and maknae of the fourth generation boy group TOMORROW x TOGETHER. Their youngest, Huening Bahiyyih, ranked second during Girls Planet 999 and became a member of the group Kep1er. 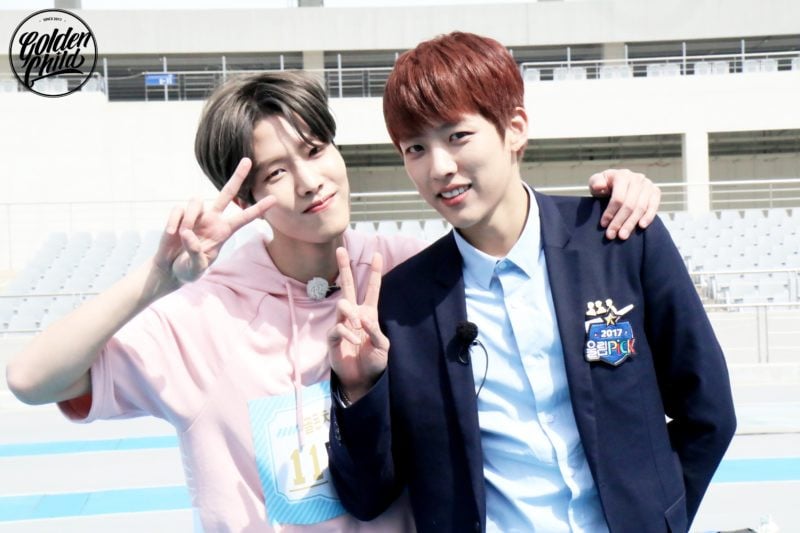 A fan complains after receiving BTS goods printed on the back of another K-Pop group's recycled goods
3 hours ago   24   14,688

AKP BUZZ
Male YouTuber cross-dressed as a woman gets assaulted by a man during live broadcast with over 10K viewers witnessing the scene
4 hours ago   21   11,761

Netizens think V and Jennie's dating rumors might be true since the agencies aren't responding
17 hours ago   153   63,469

Netizens are discontent with how fans were treated at NMIXX's fan sign event
55 minutes ago   19   1,683

Navy SEAL-turned-YouTuber Lee Keun to leave Ukraine on medical leave & return to Korea to get treated for injury
2 hours ago   10   3,419

A fan complains after receiving BTS goods printed on the back of another K-Pop group's recycled goods
3 hours ago   24   14,688

Netizens think V and Jennie's dating rumors might be true since the agencies aren't responding
17 hours ago   153   63,469