On September 6, an ARMY was bored and decided to host a Twitter Space called 'bts but im screaming the lyrics.'

Twitter's description of it stated, "ARMY treat their ears to a space where BTS songs are being screamed instead of sung," and it topped the trend list. The Space gained a lot of attention not just inside ARMY's fandom, but also to other K-pop fandoms, which took the Twitter Space to more than 60,000 listeners.

yoongi's gf (@CARROTBUNK00), who hosted the Twitter Space, also broke GOT7's BAMBAM's record. The Space also became the second one to have over 50,000 listeners. She also sang different K-pop songs from artists beside BTS, such as STAYC, TXT, TWICE's and more.

This army was lit! Lolsss it was so much fun. This space broke so many records💜🤞

LOL best fandom. 🤣The funniest part was other fandoms getting salty and trying to copy, as USUAL... 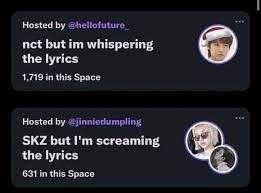 Rapper NO:EL arrested for causing an accident while driving without license and assaulting police
12 hours ago   48   16,567

SHINee's Key reveals new image for his Beyond LIVE solo show, ‘GROKS IN THE KEYLAND’
14 minutes ago   1   87

Reporter Lee Jin Ho says that actress Heo Yi Jae should reveal the name of the actor who asked her to sleep with him
4 days ago   98   23,358