5 Korean celebrities that Dispatch gave up on exposing

One of the most noteworthy newsgroups in South Korea, responsible for some of the most shocking revelations in the world of entertainment, Dispatch, is a feared, revered, and somewhat controversial name in the Korean news world. They're often targeted by netizens, even internationally, for the invasion of privacy and non-consensual behavior that the agency often indulges in, in order to gain their information. While it does definitely place them in a morally grey area, what they're doing is not deemed illegal either, at least technically, regardless of the repercussions that a certain disclosure may have on the subjects of the same. It is unfortunate, but that is how the system runs.

Over the years, Dispatch has reported several dating news as well as scandals that have taken over the nation. However, there are some celebrities that even Dispatch has given up on "exposing," and here's why.

BTS is one of the biggest musical acts today, so it is natural to wonder why Dispatch never seems to have any revelations about the group. The reason is, the members of BTS are quite literally, only focused on themselves, each other, and their group, so much so that Dispatch admittedly gave up on following them for scoops.

Quite like BTS, the APINK members were always together even when they were not working or during non-promotional periods. There's a popular anecdote about how Dispatch was following Son Naeun and spotted her alone at a cafe, only for the rest of the members to show up with bingsu (shaved ice).

The generational superstar, known for his music, his physique as well as his incredible talent as a variety show entertainer, Kim Jong Kook, spent almost all of his time either working or working out. Naturally, therefore, he was either on set or in the gym, leaving Dispatch empty-handed, which ultimately led to them leaving him alone.

Seohyun is revered in the Korean entertainment industry for being an incredibly hard worker and a sincere artist. Her daily routine was so repetitive, back and forth from home and work, that Dispatch gave up on finding any gossip to expose about her.

The SHINee maknae, much like BTS's maknae, was a much sought-after celebrity when it came to paparazzi. However, because he spent all his time with his labelmate and best friend Kai, Dispatch eventually stopped going after him.

what if taemin dates kai? 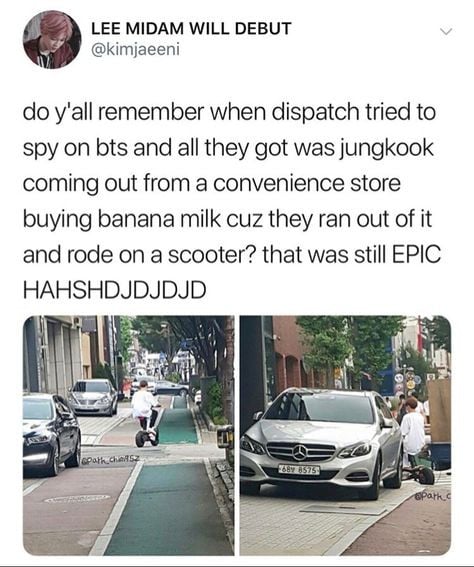 US gold medalist Sierra Schmidt dances to TWICE's 'Cheer Up' at Olympic pre-trials and reveals her K-Pop playlists
2 hours ago   6   7,183

"LIE" by BTS's Jimin continues to show its immense impact and draws the public's attention, as it achieves a new milestone
5 hours ago   7   3,067

BTS Jungkook is the first artist to have a themed cruise ship parade with illumination show, thanks to Baidu Jungkook Bar
7 hours ago   33   5,286

Netizens discuss what former IZ*ONE members are individually working on nowadays
45 minutes ago   4   1,964

Goo Hye Sun says she doesn't care about the harsh criticism she's receiving from the art industry
2 days ago   83   51,381

AKP BUZZ
MBC apologizes for using inappropriate photos representing countries including a photo of the Chernobyl disaster for Ukraine during Olympic Opening Ceremony
2 days ago   97   20,529