This past week, Yoochun was the subject of criticism for appearing in Thailand without a mask. He arrived in Thailand on September 19 and was self-quarantined for 2 weeks before starting up his concert and other activities in the country. His label Re:cielo explained the photos were from a filming for a concert, and Yoochun as well as other agency staff followed COVID-19 pandemic guidelines according to regulations in Thailand.

On November 7, Re:cielo stated, "We would like to explain what happened with the reports saying Yoochun did not wear a mask when he arrived at a Thai airport on November 5. After arriving in Thailand on September 19, 2020, all staff and artists underwent self-quarantine for 14 days as advised by the Ministry of Disease Control and the Ministry of Public Health in Thailand, and we followed a rigorous COVID-19 examination in accordance with Thai government guidelines."

The agency continued, "The photos were published on November 2, and they were taken during a VTR shoot to promote his concert in Thailand. The photo shoot was conducted in compliance with thorough quarantine rules as well as with prior consultation with officials. All staff and artists are making the utmost effort to prevent COVID-19 by wearing a mask on arrival at the airport and throughout the schedule. Nevertheless, we sincerely apologize for causing so many people to worry due to the misleading photos."

Stay tuned for updates on Yoochun.

I really don't like this ritual when korean artists are apologizing for worrying public when it's actually was not their fault at all.

Bullshit "reporter" took fans videos and pictures from November 2nd from TV studio event and made up clickbait articles how Yuchun arrived in Thailand without mask on November 2nd, and k-pop sites, like Allkpop and Koreaboo, jumped on hate bandwagon with reposting this without looking if it's true or not.

And even now "reporter" made it look like it somehow was Yuchun fault that somebody posted false information about him while "apology for worry" was actually at the end of company statement.

At the start they informed that all, what was posted in those articles, were false. 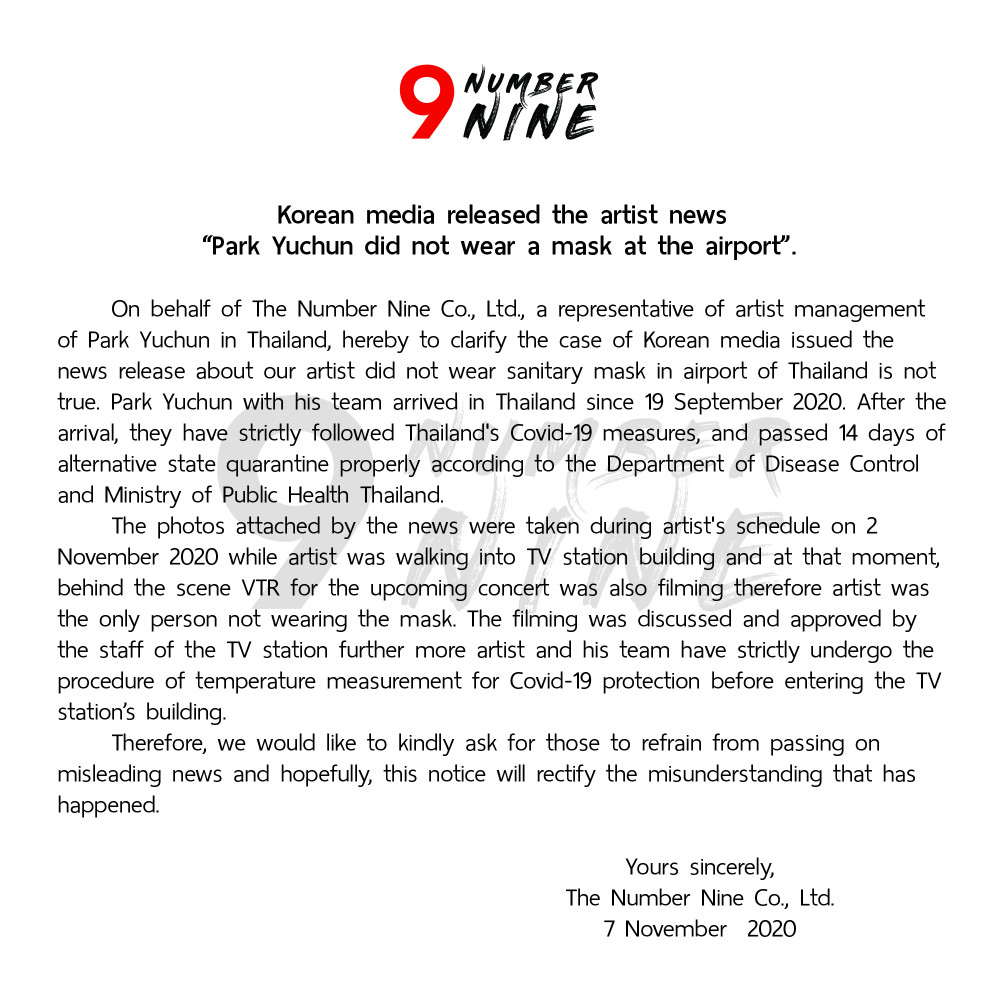 Girls' Generation's Yuri talks about finding out about her mother's cancer
3 hours ago   6   7,010

Former April member Hyunjoo personally admits she was physically & verbally bullied by her group for 3 years, DSP will not let her terminate her contract
16 hours ago   131   63,014

Girls' Generation's Yuri talks about finding out about her mother's cancer
3 hours ago   6   7,010

Kang Daniel tells the story of his personal mental health struggle and recovery through his mini album ‘YELLOW’
3 hours ago   4   1,489

Former April member Hyunjoo personally admits she was physically & verbally bullied by her group for 3 years, DSP will not let her terminate her contract
16 hours ago   131   63,014

Seo Ye Ji expected to pay billions of KRW in penalties for her breach of advertisement contract
1 day ago   123   117,699

"There was always laughter around Seo Ye Ji," film director Seo Yoo Min praises the actress in light of the recent controversy
2 days ago   108   42,715