‘MAP OF THE SOUL ON:E’ is a beautiful dream you don’t want to wake up from

If you thought BTS had reached their peak, think again. The Bangtan boys have once again proved themselves to be artists belonging to the top tier of the world’s stage. On October 10, 2020, BTS held their first ‘no-contact’ concert after 'Bang Bang Con: The Live.' For ARMYs who attended the latter, think a hundred times bigger and better. That was what 'MAP OF THE SOUL ON:E' (MOTS ON:E) was. There were blood, sweat, and tears on stage.

A huge part of the concert's incredible success was owed to the incredibly talented dancers who performed with BTS throughout the concert and the production team who made sure the entire program was carried on without a hitch. Something that many were apprehensive about when it came to online concerts was the feeling of “realism.” Suffice to say that the real-time live stream was no less than an actual concert when it came to feeling their energy and love for ARMYs. While many may not realize this readily but ARMYs played a significant role as well, especially for BTS themselves. During their last greeting with the fans, almost all the members touch upon the fact that while this does not compare to a real concert because the tangible synergy between an artist and their fans, which is a key factor in the quality of a performance is not physically attainable, this online concert still meant a lot owing to the on-screen presence of ARMYs. Jin mentions how he was afraid that it would feel almost felt like any other promotional stage for him until he could see the faces of hundreds on ARMY’s all over the stage walls. It is here that one can feel the sheer importance of ARMY for BTS. There is no fan service, no pretension here when they say that they need ARMYs to be complete.

The concert starts out with a brilliantly resonant performance of “ON,” complete with the full regalia of their characteristic marching band. The members first appear in hooded red gowns, looking onward. If there were ever a song perfect for a war cry, this would be it for all the 7 members of BTS are nothing but warriors. The second performance is that of “N.O” followed by “We Are Bulletproof Pt. 2” which holds symbolic importance, representing the long way they’ve come and with no ease whatsoever. These three performances perfectly set up the preface for what’s to come. “We Are Bulletproof Pt. 2” starts with a never seen before dance break delivered to perfection. Speaking of perfection, next came the leader himself, RM. RM’s performance of “INTRO: PERSONA” was easily one of the best solo performances of RM on stage in the entire history of BTS. ARMYs were left breathless while he didn’t even stop to breathe in between those killer verses. It also seems like RM is seriously considering “Kim Namjoon for President” from the looks of how he started off his stellar performance. Almost immediately after, we’re taken way back again to “Boy In Luv,” creating a dreamy past and present narrative. “Boy In Luv” is starkly in contrast with BTS today but still a vital part of the journey, which led them to “Boy With Luv” and hence, important. The hype is held up flawlessly as the group transitions into “Dionysus.” However, this is no ordinary rendition of the track. A slight switch in the style of the beat gives a flavourful twist to the song and, thus, the performance. The only song that could possibly lead this would be “INTERLUDE: SHADOW” and Suga knocked it out of the park with this one. It is no surprise that Suga is officially rapper extraordinaire. Coupled with the brilliant stage direction, supporting dancers, and special effects, this performance of “Shadow” bears no comparison.

Having reached the top, BTS now carefully tones it down with a mellow but equally intense performance of “Black Swan.” The black swan in art usually stands for the pressure of achieving performative perfection. As such, it is undoubtedly the most appropriate follow-up to “Shadow” and the story it entails. Jimin is the absolute definition of elegance in his dance break that brings “Black Swan” to an end. At the point, the pre-recorded bits might as well be little “get yourself together” breaks for ARMYs, and they’re essential too because the very next moment, we’re met with one of the mightiest rap lines in K-Pop performing one of the most potent tracks from the album, “UGH!”. The reason why “UGH!” is so socially relevant is a whole another discussion altogether, but this performance was unforgettable from start to finish. It is only fair that the most powerful rap line is followed by the most soothing vocal line as they perform “Zero O’Clock” while looking like actual Princes and sounding like angels from up above. Quite appropriately, they’re succeeded by the solo performances of Jungkook with “My Time,” Jimin with “Filter,” Jin with “Moon” and V with “Inner Child.”

The stages are set up with a magical quality for each of these, and it keeps getting better. Jungkook is a modern-day rockstar; Jimin weaves poetry with his body, and Jin could melt all worries away with his honey voice. V’s performance featured another bright star other than him, a little boy dressed exactly like V himself. Their interaction was dream-like, and the performance was definitely a tear-jerker. Huge props are owed to the stylists who dressed all of them in a way that embodied their music. Most notably, V was dressed in striped overalls and a mature jacket – the perfect combination for a song that speaks of preserving one’s innocence no matter what. Next comes the human vitamin, J-Hope, with his “OUTRO: EGO.” There’s always a unique charm in everything J-Hope does, and his solo stages are perfect examples of the same. His dynamic with his dancers is admirable, and it creates such a familial ambiance that it’s hard not to feel like he’s singing just for you. The cheery vibe is carried forward in the perfect performance of “Boy With Luv.” There’s just something so irreplaceably authentic about these 7 artists coming together to create music, and it shines through in their group performances. “Boy With Luv” could mend a million broken hearts with how adorable it was! The members then pause to interact with ARMYs and it is every bit full of warmth and giddy love. They follow up with 3 consecutive performances of “DNA,” “DOPE,” and “NO MORE DREAM” enhanced with commendable augmented reality and special effects. All the tracks are re-made into rock band versions, creating an enviable fusion of the old and the new. From the performances of these old tracks, one can see just how ahead of their time BTS was when these songs were first released. Rapper JK is back at it again with his unmatched delivery, making ARMYs now long for the olden times, and the “No More Dream” dance break delivered by 2020 BTS was a dream in and of itself. Finally, the last leg of the concert arrives and no one’s happy about it, at least not until “Butterfly” starts playing. Emotions reach an all-time high, and they’re kept on hold for “Run” and “Dynamite,” followed by a final goodbye. This is where Jimin has a cathartic outpour of all pent up emotions that he had been holding in all this while, and the rest of the members touch upon the significance of this online concert, especially at a time when tomorrow is uncertain.

With a final wish for the safety of all ARMYs around the world, the seven usher in the most touching performance of the night – “We Are Bulletproof: the Eternal.” Here come the waterworks! Just like in their usual concerts, BTS closes the curtain but not before walking the entire circumference of the stage, looking up at all the screens that ARMYs were behind. The concert has come to an end, and yet it seems like BTS is just getting started. As they bow before ARMYs, the world bows before them. Thank you, BTS!

Tickets for Day 2 of “MAP OF THE SOUL ON:E” are available on the Weverse store, so if you missed it, catch them tomorrow for an experience you’ll never forget!

They have truly revolutionized what we think of online concerts. I was amazed, the sets, the dancers, the graphics, the fan interaction, just marvelous. 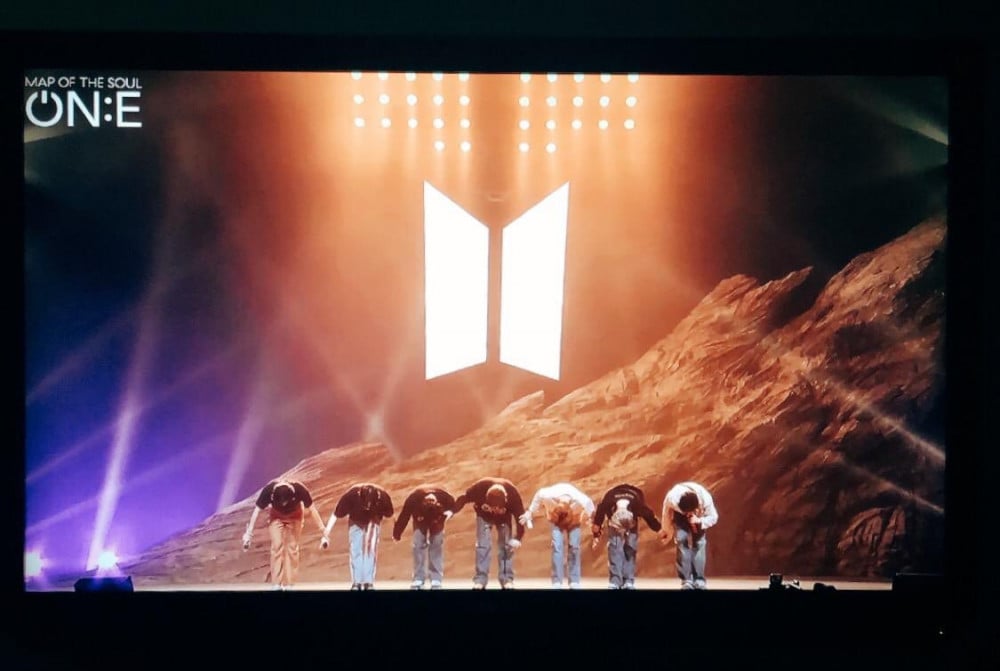 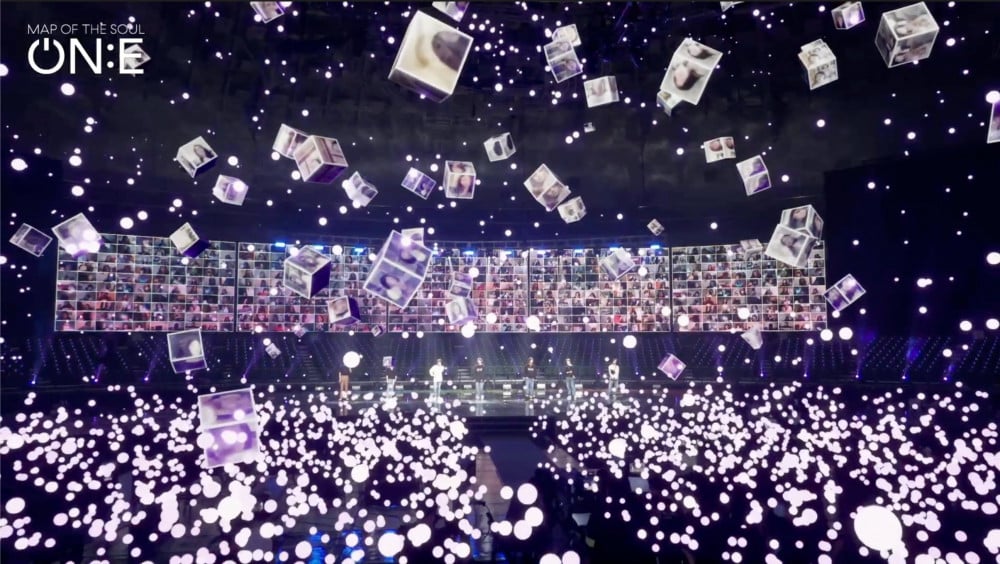 A beautiful dream indeed, but I want to wake up from it and have live concerts again 😭 I was so happy that they performed Run, one of my all time fav songs 😍

'Vogue Korea' deletes their 'What's In My Bag' with Seolhyun after being accused of using Jimin in a hidden tag
1 hour ago   4   8,960

Netizens think Rain is the quintessential example of the bad boss who always has to have his way
3 hours ago   27   20,648

'Vogue Korea' deletes their 'What's In My Bag' with Seolhyun after being accused of using Jimin in a hidden tag
1 hour ago   4   8,960

Netizens think Rain is the quintessential example of the bad boss who always has to have his way
3 hours ago   27   20,648

Netizens pass harsh judgement on past videos of April for their alleged 'rude actions' toward the new members
3 days ago   75   43,074