Big Hit Entertainment, which drew a lot of attention from the market, closed at 258,000 KRW (~226 USD) on the first day of its listing on October 15th KST. Its market capitalization as of closing is 8.732 trillion KRW (7.6 Billion USD).

Before the listing, many believed that Big Hit's stock price would close at the upper limit, as the listing occurred right after BTS topped the U.S. Billboard charts and won awards at the Billboard Music Awards. Many stated that Big Hit would have similar gains as YG's first publicly traded day.

In particular, there was a view that the stock price could continue to rise for a considerable period of time if the "ARMYs (BTS's fandom)" join. As such, the K-pop industry is saying that the negative closing price of Big Hit is somewhat shocking.

An official from an unnamed agency stated, "At least I thought the upper limit would be maintained on the first day, but I didn't know that it would drop to a negative from the first day. I'm worried that the fall of Big Hit, which is classified as the biggest player, will affect the entertainment industry as a whole." In fact, stock prices of major agencies such as SM (-6.73%), JYP (-5.29%), YG (-6.75%), and FNC (-5.31%) also fell one after another.

Some say that the value of Big Hit has been somewhat overvalued. An official from another unnamed agency stated, "Because BTS has recently topped the Billboard charts, there is a 'fluff' added to Big Hit. SM, JYP, and YG have been building a firm foundation until now, and EXO, TWICE, and BLACKPINK are still active. Also, these companies have various artists. So isn't it hard to understand that Big Hit, which is heavily dependent on BTS, has three times more market capitalization than all of those companies combined?"

Some say that Big Hit's value could fluctuate as it relies on the group BTS for the vast majority of its revenue and worried about how their enlistment will affect the companies revenue. In a stock report, Big Hit also posted the company's opinion on the issue of enlistment in the investment risk category, saying, "There is a risk of suspension of activities due to the enlistment of major artists. However, we believe that a delay in enlistment under the Military Service Act will be possible until the end of 2021."

Meanwhile, Kim Hyun Yong, an analyst at EBEST Investment & Securities, said, "The entire market is not good, with the KOSDAQ falling 1.98 percent. As Big Hit's market capitalization exceeded 10 trillion KRW (8.7 Billion USD) due to the high initial trading price, a correction was initialized."

So what is the value of BTS? Although simple conversion is difficult, stock market watchers say that the value of BTS seen by the market can be understood to some extent through Big Hit's sales and stock prices.

According to the securities report submitted by Big Hit, BTS' sales were 97% last year in the total consolidated sales of Big Hit, and 88% in the first half of 2020. With the acquisitions of Source Music and Pledis Entertainment ahead of the listing, GFriend and Seventeen also joined the artist lineup for Big Hit. However, BTS's sales are still expected to be about 80 percent of Big Hit's sales in the music industry. 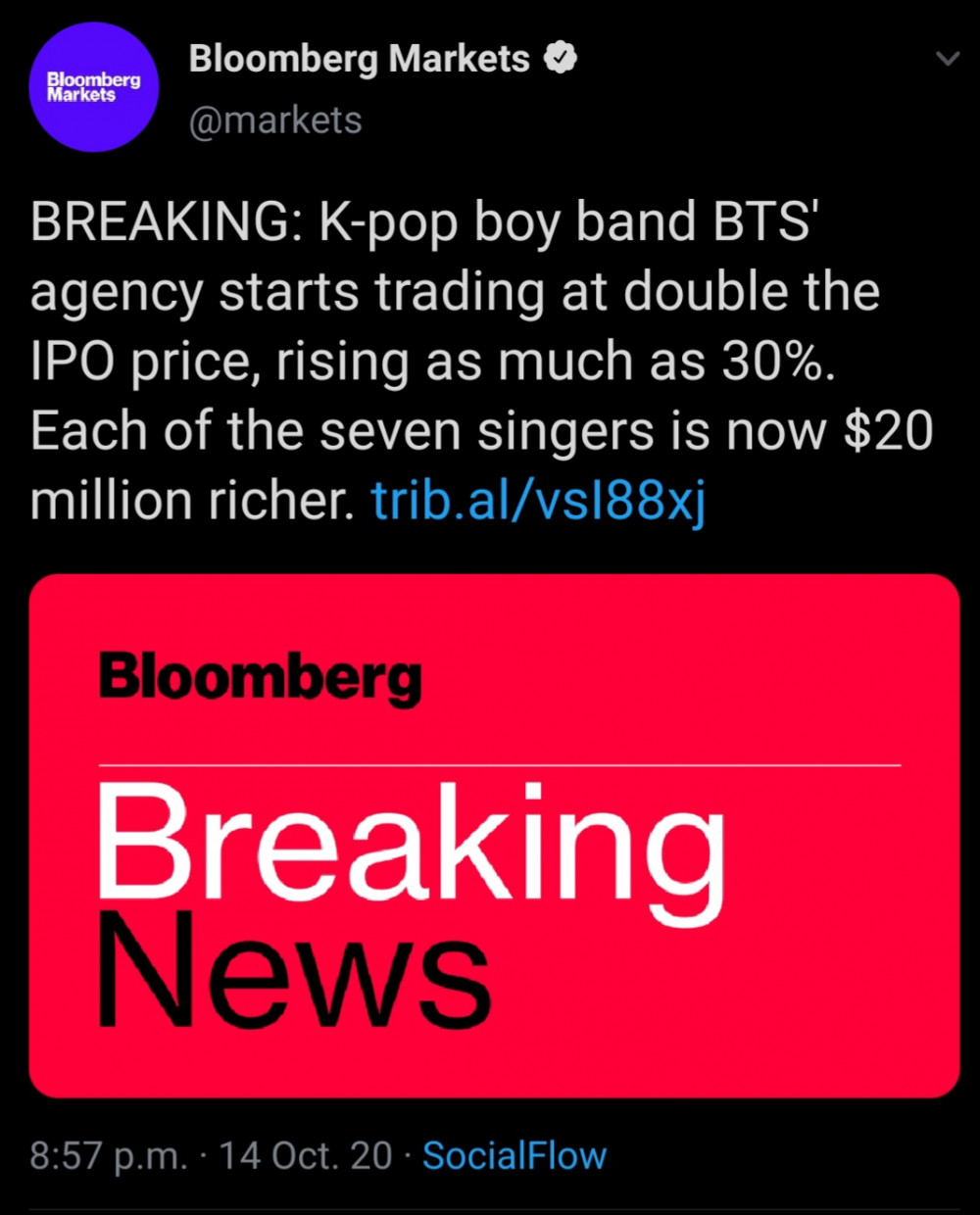 Hey antis...🧐 this is just another evidence to support the fact that Bighit aka "BTS company" is *indeed* the one which dictates the value of the remaining labels...... if Bighit go down, your shell companies drown.... if BTS go down... your johndoe favs will get their ass kicked into retirement in their twenties....😂

BLACKPINK's Jisoo chosen as the most beautiful female idol by South Korean plastic surgeon
3 hours ago   15   12,086