GWSN – 'THE PARK IN THE NIGHT PART TWO'

GWSN is back, this time with the second part of 'The Park in the Night.' Part One was their debut EP, and Part Two has seven tracks instead of six like the first one. The first one was a success, so we'll see if this one does as well. It includes the title track "Pinky Star." For those who don't know, GWSN is a Korean abbreviation roughly translating to "girls in the park."

I like "Pinky Star." It's light, refreshing, and not too cute. These guys do remind me of LOONA a bit, though. The only issue I have is the obviously synthesized drum machine effect. It's a minor quibble, but it stood out to me. And after listening to this, I still don't know what a 'Pinky Star' is. I don't think they do, either. I think "TOKTOK" is a stronger song overall than the title track. We have a variety of layered sounds, including clockwork style noises too, that just adds to a rich sonic landscape. These girls know how to sing, and they harmonize beautifully. I also particularly heart how the chorus stands out from the rest of the song.

"BLOOM (True Light)" is a fairly traditional pop song. There's nothing amazing about it, but it is a solid bop nonetheless. It's got the standard tropes, the raps, the harmonies, and the pounding beats when the tune picks up. Still, it fits right in with what we've heard so far. And it's unpretentious, not trying to be anything else other than what it is. "Miss Ping Pong" is very cheerful, upbeat, and dare I say playful? These girls seem like they're having fun with this one. It's kind of stripped down, and I like the way the chorus sounds. While I'm not really a fan of the autotuned title repetition, the rest of the song is just a bundle of fun. Try not to smile while listening.

And we come to "One & Only." It's very firmly in the pop camp but manages to stand out from other pop tunes. I like the somewhat unstructured beginning and the echo effects. The chorus is repetitive but passes by fast enough where you won't get bored by it. "Growing ~ for Groo" starts with a tropical house beat. It's cute, and soon enough it reaches a bold chorus and a pounding beat. I love this because I thought was going to be one thing, and it turned out to be another style entirely. And actually, this is one of my faves on here. And just to be clear, "Groo" is a tree. Though, to be honest, when I read the title I thought about this Groo:

One of the things I like about this band is that they can be playful without being overly cute. There's some serious talent behind the cuteness, which can't be said of every band with that shtick. For one they have not one but two rappers, and while that's becoming more common these days, I think this works quite well. I can't deny that I enjoyed this one, just like I did the last one, and with each release, they keep getting better.

There's a lot going on here but I'm not sure what I just watched.

But it's not bad. Let me explain. The girls live in this floating villa where the rooms are strangely connected. Mina takes a pic of a glowing tree ('Groo,' judging by the concept text) and sticks the snapshot in her locker. Eventually, the girls make their way down to the growing tree and the swan while singing and dancing. How they get there is not explained, but there is a map with a number of strings pulled across it. Maybe that's how?

Okay, now I've been hard on some videos, but hand me MVs like this and I'll happily watch all day. They worked hard on this one, and it shows. The floating in the clouds thing isn't new, but the unique features are, including the topsy turvy insides and little park inside the crust of this floating island.

I like the concept, and there is a basic narrative, and I like the unique aspect of where they go. They don't have to fall through some nebulous hole or vanish in a flash of light, we just see them getting there. They walk into different rooms, they even pull each other through doors, and the whole thing just hangs together, even if it defies logical description. And it's fun to see a video that is so closely tied to their album concept.

I enjoyed it, and coupled with a sweet song made it even more fun. 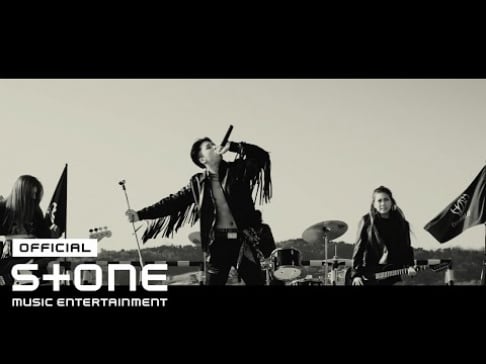