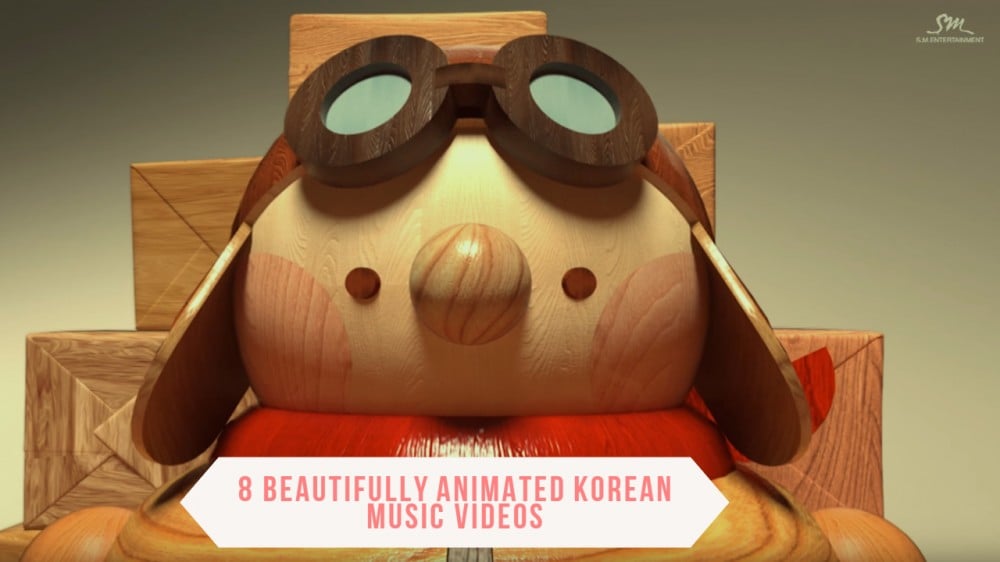 Music Videos in the K-pop scene are known to be the most extravagant and entrancing in the world. Its artistry is one that many acknowledge. However, music videos do not always need a person from reality to star in it. Instead, some musicians have started to animate their MVs, a trend that is beginning to become more and more frequent in not just the K-pop scene but through all genres. The following takes a look at some of the most beautiful and diversely animated music videos in the Korean music scene.

Lush tones of blue, purple, and pink saturate PENOMECO's "COCO BOTTLE." The tones really make this a stylishly animated music video, but what is the most captivating is how the simplest geometric shapes can enthrall the audience. There is a sequence where the subway is not outlined but the geometric shape of the windows is all the viewer needs to infer that this is a subway. The shapes may be simple but it's done in such a  trendy manner that these shapes are, sometimes, all we need.

"Sleeping Beauty," is a wonderful world, a storybook that has animated and come to life. This music video is placed in a more realistic reality with a color scheme that can mimic our world and moments of the day to day that is just lovely to watch. However, the beauty of this piece is the glitching that slowly makes its mark near the end. The glitch, a metaphor about how we hold onto the people that we love and miss although they may not be next to us, is done so smartly, that when the glitch first starts, one may even think that it was a mishap. Make sure to view this video until the end for a small twist in this love story.
3. Shin Yong Jae x Luna - "It's You"

"It's You" is a completely different type of animation than the ones on this list. It is reminiscent of our childhood days when we thought that our dolls had a mind of their own, and when we went to bed, the dolls came to life, playing out their existence while we dreamed. The MV is whimsical and wintery and perfect to watch during the upcoming holiday season with a nice warm cup of hot chocolate.

"Cupid" is funky animation, where the lyrics dance away on the screen. Most of the lyrics are animated and flash from one style to another. And while there are little breaks of human animated figures without any flashing words, most of this video relies on the whirling mechanics of its word. Although animating lyrics may seem simplistic, once "Cupid" enlarges on your scream, it will be sure to delight.

"Island," is a visually saturated jam-packed fantasy. The main character, a clay figure animation is probably the most simplistic element of the whole piece. From giant green patchy figurines that tower over the main character to a psychedelic gum wad, to planets of bare trees rotating in a dimension colored pink, "Island" is a feast for the eyes.

Legendary Duo Leessang and Jang Kiha and the Faces' "Let's Meet Now," takes its rendition of animation in a webtoon style. Like a comic book, the scenes have borders and swipe down up and to the side, like the viewer is reading the music video.

Rap Monster's "Forever Rain" slows things down a bit with its pencil drawing aesthetic. The charm of this video is how stark everything is, black on white or white on black, with simple line work (but not too simple). The aesthetic also suits the song at its pace. Most of our video imagery these days are filled with a non-stop, excess of visual food, working to snatch the video watcher's attention. "Forever Rain," is the exact opposite of this trend, taking time to focus on all the details. A technique used over and over again is when only one element in the scene moves while everything else stays still, allowing the onlooker to take in everything. Even one of the last scenes starting from the 3:47 mark is about 30 seconds of one motionless drawing, the camera simply calmingly panning out. It is refreshing to see a slower moving music video that is done so skillfully.

This is probably the most experimental and ambitious animated music video on this list. For the first minute and a half, the only thing on the screen is a black outline of a square or circle or both on a white background. That's it. Just using a circle and square, Jang Gi Ha and Faces manage to delight, with simple changes in the square and circles' size, pace, and overlapping.

And the obvious exclusion: Hate You by 2NE1:

Even if GD is like in it, but all the rest is a cartoon.

A female reporter is criticized for sexualizing TWICE's Momo in her article headline and netizens say it is sexual harassment
4 hours ago   13   10,369

Netizens pick BLACKPINK's uniforms as the most legendary outfit on 'Knowing Bros'
5 hours ago   13   13,565

Giant Pink publicly apologizes to owner of dog her own dog killed; owner refuses to meet for in-person apology
14 hours ago   71   29,423