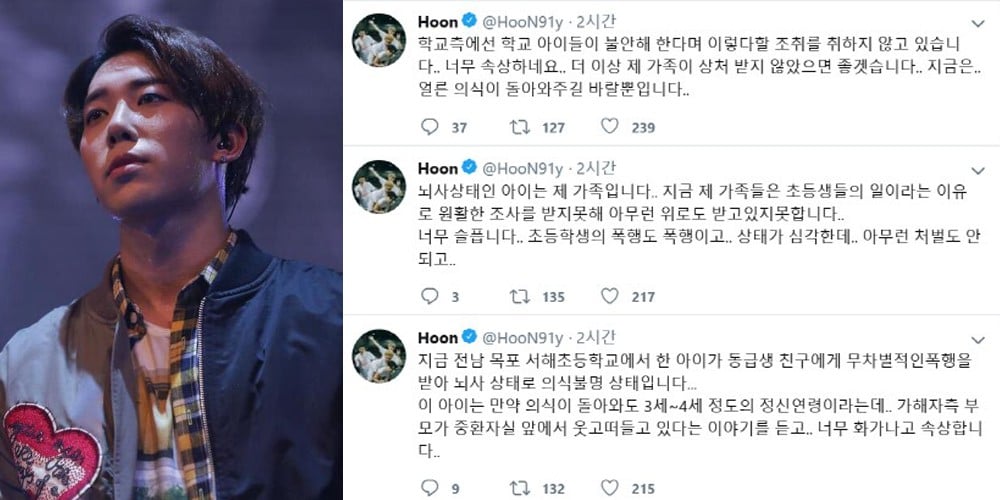 U-KISS's Hoon took to his personal SNS to expose that his family has suffered from a shocking case of school violence.

"Currently, a child from an elementary school in Jeonnam Mokpo is in a comatose state after being pronounced brain dead, due to being victimized at the hands of indiscriminate violence...

Even if this child recovers his consciousness, his mental state will be that of a 3-4 year old; despite this, the parents of the assailant are laughing and gossiping right outside the hospital wing. Hearing this makes me very upset and angry. The brain dead child is my relative. Currently, my relatives are unable to receive any consolation, as the case was waved off as a simple occurrence of elementary schoolers fighting with no official investigation...

I'm so heartbroken.. Elementary school violence is still violence.. the child's condition is severe.. but there is no punishment.. the school is also not taking any action, claiming that it will cause the other students worry.. I'm heavily upset.. I hope that my relatives will not be hurt any more.. for now.. I just hope that the child will regain consciousness soon.."

Back on October 23 at 9:48 PM KST, it was reported that a male elementary school student 'A' lost consciousness in a fight with a classmate, and that 'A's consciousness has not returned yet even after being transported to the hospital.

Our hearts go out to Hoon and his family. 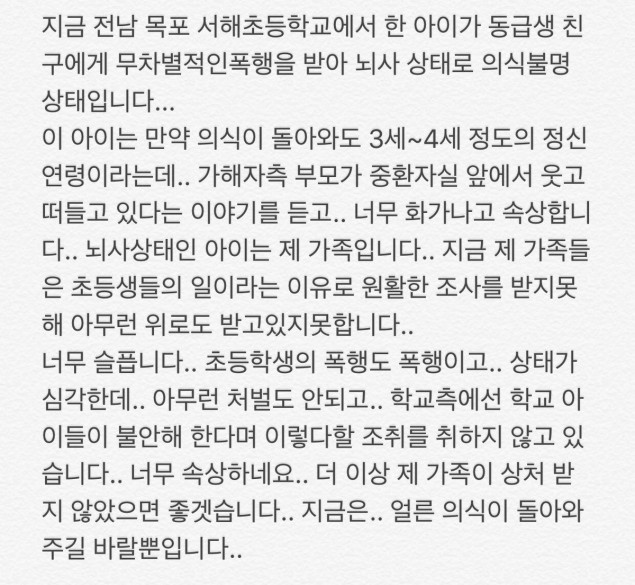 WTFFF OH HELL NO! I HOPE THIS BLOWS UP SO THAT A REAL INVESTIGATION CAN BE DONE!! WHAT KIND OF FUCKING PEOPLE LAUGH OUTSIDE OF SOMEONE'S HOSPITAL ROOM?!?

EXO Kai's baby nephew gains attention for his good looks and similarities to his uncle
8 hours ago   8   16,315

Informant A reveals that BTS Suga was well aware it was Jim Jones' speech and intentionally sampled it for his mixtape
8 hours ago   155   18,727