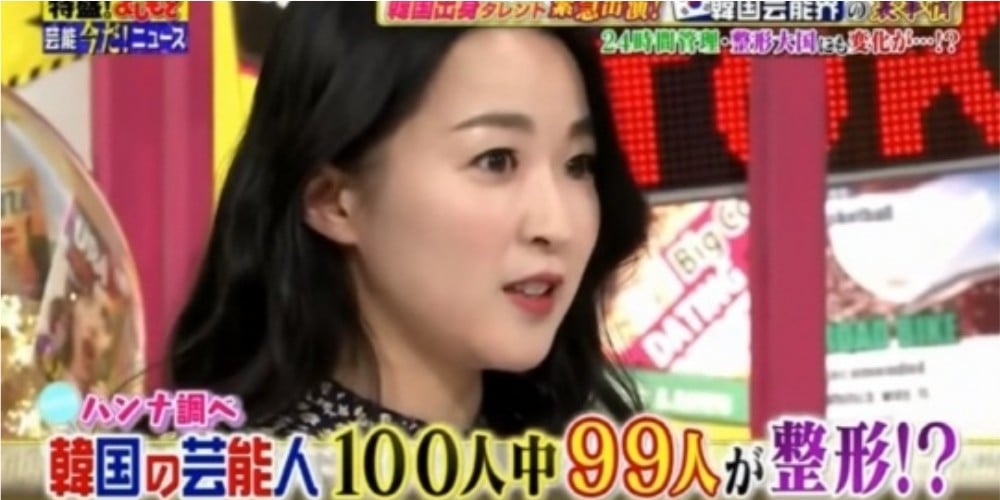 Entertainer Kang Han Na is receiving heavy criticism for her remarks on a Japanese show.
According to Japan's Daily Sports, Kang Han Na guested on Yomiuri TV's 'Tokumori Yoshimoto' and talked about Koreans and their obsession with cosmetic surgery.
She stated, "I believe 99 out of 100 Korean celebrities undergo cosmetic surgery." The Japanese audience reacted with much shock. Kang Han Na continued, "I have many Korean celebrity friends and their face changes every time I meet them. They get embarrassed when I keep looking at them. But they don't say they did (undergo cosmetic surgery). They don't open it up that much, but they do get embarrassed when I stare at them."
Kang Han Na then emphasized she didn't undergo any surgery. However, she often heard people recommending surgery to her.
She also talked about K-pop girl groups and claimed every group includes one all-natural member. Kang Han Na said, "A face with no cosmetic surgery is popular. In girl groups, they include a member without any surgery, and that member becomes popular. She's natural, that's why, and that kind of member has a lot of aegyo."
Korean netizens reacted with much anger at Kang Han Na's disparaging remarks, primarily since it was on a Japanese show. Comments stated, "Did she have to do that on a Japanese show? No respect for her country," "Just go live in Japan," "So desperate for attention that she's selling her own country," "Even if it's true, why say that on a Japanese show?" Some are even demanding Kang Han Na to be deported from South Korea.
Meanwhile, Kang Han Na debuted as a weathercaster in Japan in 2007. She has been working as a freelance reporter for various Japanese magazines, newspapers, and online media outlets. Currently, she promotes as an entertainer in Japan.

There's some truth in what she says but she's exaggerating. It sounds like she is just telling the Japanese audience what they want to hear so they will accept her and she can stay there long-term.

Netizens are funny. She should "go back to Japan" when she's already been promoting there for the last decade? And they aren't even mad about what she said - because its true - but where she said it. Japan (and the rest of the world) already knows about Korea's notorious obsession with beauty as well as being the literal plastic surgery capital of the world.

Instead of worry about what another country thinks of your values, they should focus their hate on the issue of them having the #1 bully and suicide problems that stem from their hazard beauty ideals.

Lady Gaga talks about the positive experience she had working with BLACKPINK on their new song 'Sour Candy'
21 hours ago   88   29,337