5 'We Got Married' Couples We Miss

'We Got Married' was a controversial show to many viewers because of its scripting and cause for potential scandals. It was on the air for nearly 10 years and stopped airing in 2017 and we miss the show! There were many amazing couples on the show over the years, but most people can agree that these five couples showed amazing chemistry on-screen and made viewers blush. Here are five of our favorite 'We Got Married' couples!

As two extremely talented vocalists, MAMAMOO’s Solar and Eric Nam were an angel-voiced couple well-received by many fans, earning them the nickname of “Ddongie Couple.” Some of our favorite moments from this pairing include:

Eric has since shared on the KPop Daebak podcast that he and Solar are on excellent terms since the show ended and hopes that fans will understand that “We Got Married” is a show only for entertainment and not to take things too seriously.

The SungJoy couple’s clips are some of the most viewed clips from “We Got Married,” and for good reason! Most couples on the show are awkward and unsure how to act with one another, but Joy and Sungjae’s natural chemistry and sweet moments make them one of the top couples of the show. Here are some of Joy and Sungjae’s most memorable moments:

Though APink’s Naeun and SHINee’s Taemin were one of the more sensitive couples on “We Got Married,” they were still a popular pairing to date, receiving great support from both of their respective groups. Here are some of our favorite clips of this shy couple!

Jinkyung and Jota were not only a model couple with breathtaking visuals, but also showed viewers how they supported each others’ careers and hobbies in a sweet relationship. Here are some of Jinkyung and Jota’s sweetest moments!

Take a blast to the past with Victoria and Nichkhun! This couple may have been on the show nearly a decade ago, but fans still adore this pairing up until today.

Who is your favorite “We Got Married” pairing? Let us know in the comments below!

The number one couple we don't miss.... 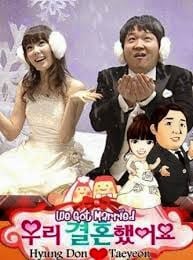 How are you going to leave out jokwon and gain?? They were the best!!!

Netizens react after iKON's Bobby decides not to include a verse of his own in the 'Kingdom: Legendary War' rap battle stage 'Full DaSH'
4 hours ago   10   19,522