Netflix is becoming a key player in influencing the Korea media and content ecosystem. Following its contract with LG U+, Netflix has formed a partnership with KT this month and will be serving content to living room televisions all across Korea. Now Netflix has fixed its place among the competition in the media industry to fight for copyrights with large companies such as the CJ ENM.

Four years have passed since Netflix entered Korea. Many expected Netflix just to shine and disappear like a typhoon when it was first launched in the country. However, Netflix has now become the number one OTT content provider in Korea. This was the result of a "localization strategy" by actively investing large amounts of capital in Korean content.

This is when Netflix decided to change its strategy. They decided to localize their contents. The plan was to increase subscribers with content related to the domestic market. Netflix quickly made its move and knocked on the doors of the Korean content market by investing approximately 57.8 billion KRW (~48,378,525 USD) in director Bong Joon Ho's 'Okja'.

The promotional effect of "Okja" was significant. Korean Netflix subscribers, which had been around 90,000 before "Okja" was released in June 2017, had increased to more than 200,000 after the release of Okja according to app analysis company WiseApp.

Since then, Netflix has led the box office success by releasing a Netflix original series such as 'Kingdom', 'Prison Playbook', 'Because This Is My First Life', and more.

For Netflix, securing Intellectual Property (IP) rights through investments in production cost was more important than releasing content on Netflix first. This was because they need the right to continuously distribute those contents on their platform. If they had only received the right to broadcast the content, then there will be restrictions on the use of the contents in the long-term.

Netflix was able to bring drama content as they invested in the dramas in the pre-production stage and mid-production stage. Then, they are able to obtain overseas rights by investing after the completion of the production. Although Netflix does not produce original content, Netflix has invested in tvN's 'Itaewon Class' and 'Mr. Sunshine', JTBC's 'King: Eternal Monarch' and 'Hospital Playlist' in order to air these dramas as original content overseas.

In November of last year, Netflix, CJ ENM, and JTBC already formed partnerships on over 20 contents over the past three years. Netflix also acquired a 4.99 percent stake in Studio Dragon in CJENM.

Netflix's investment in Korean content is expected to continue to increase. This is because Korea is the fastest shortcut to the Asian market. Ted Sarandos, chief content officer (CCO) at Netflix, said at an event held in Singapore in 2018, "The world loves Korean content so much that Netflix will invest heavily in Korea as an important part of expanding in Asia."

Sarandos also recently revealed in a column published in the LA Times that Korea's content production will be carried out normally amid the COVID19 pandemic. Accordingly, next year, Korean original series such as 'Love Alarm Season 2' will be released on Netflix along with a series of original Korean content next year.

2020 THEK2 too, this is one of the most popular kdramas on nerflix

This is the Best K- Drama-Politics-Action.

snsd YoonA and Ji chang Wook did an amazing couple, their chemistry is great! All the cast did a great job. 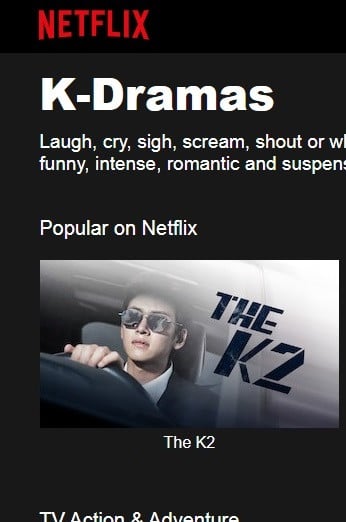 I am happy that netflix is getting more and more dramas after closing down our beloved Dramafever but damn they need to get proper translators I hate it when translators summarize what the actors say rather than tell us word for word in the Korean sentence structure.

Stray Kids's Hyunjin once again personally apologizes to his former classmates in a handwritten letter
7 hours ago   82   17,399