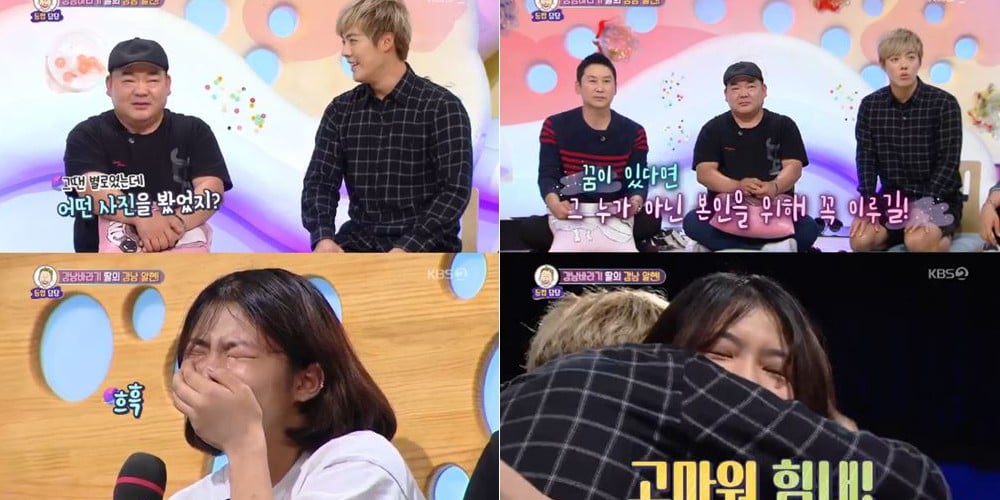 On the October 8 broadcast of KBS2's 'Hello Counselor', one father sent in his story about how his 16-year old daughter ran away to Seoul without provisions, so she could marry singer Kangnam.

According to the father, his one and only daughter became a fan of Kangnam 4-5 years ago, since her elementary school days. At first he only thought of it as normal affection from a fan toward a singer, but one day, the daughter declared, "I'm going to marry Kangnam." Furthermore, the daughter has now moved to Seoul on her own, working various part-time jobs to meet ends, staying in temporary homes like the 'Goshiwon' (tiny, dirt cheap one-rooms), a friend's house, etc. 7 days a week, the daughter visits a cafe run by trot singer Tae Jin Ah, who has worked on several collaborations with Kangnam. She revealed, "I can see Kangnam oppa about once a month if I keep going there."
Later, when Kangnam made a surprise appearance thanks to the 'Hello Counselor' staff's invite, the daughter burst into tears, while Kangnam got on his knees in front of her father, saying, "I'm sorry". Kangnam then made the situation worse(?) by confessing that he "dropped out of high school" and "also ran away from home", but in the end, he gave his fan genuine advice by wishing, "If you have a dream, please fulfill it for yourself and your family, and not for me."