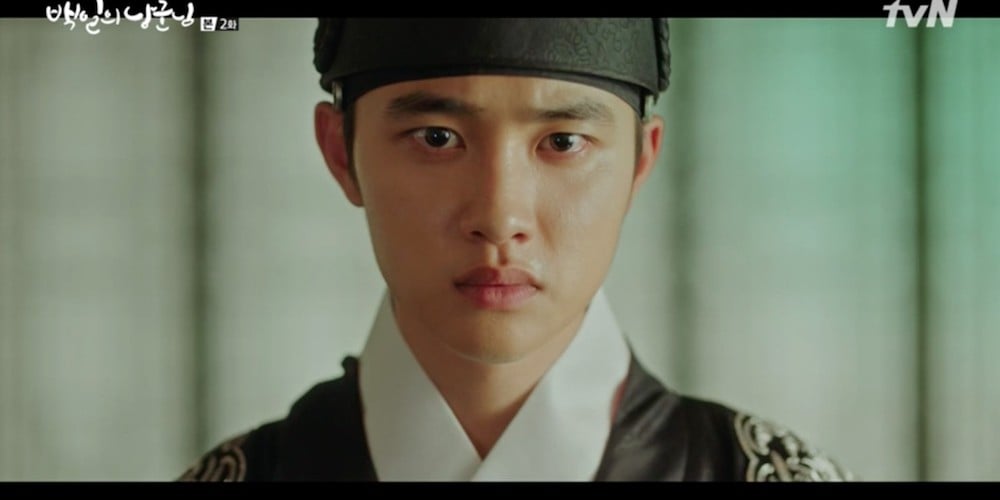 It's day 2 of tvN's newest Mon-Tues drama series, '100 Days My Prince'. Yesterday, episode 1 left us with really strong sympathy and fondness toward the two main characters - the crown prince Lee Yool (played by EXO's D.O.) and the wronged heroine Yoon Yi Seo (played by Nam Ji Hyun). But in episode 2, the drama ended up going in a new direction by giving us slight, but impactful glimpses of the agendas that many of the other characters are hiding up their sleeves. While I was content to have such detailed backstories of Yool and Yi Seo in the last episode, I did mention that I was looking forward to how well this drama would handle the roles of the other characters aside from the two main ones, and episode 2 answered my question right off the bat.

In episode 2, Yool decides to hold a birthday party and asks for shooting arrows as his only desired gift, hoping to receive arrows which resemble the one used by the mysterious killer in episode 1. Shockingly, the same exact type of arrows comes from the king's most trusted advisor, Kim Cha Un. Remember, this is the guy who killed Yi Seo's family in order to put Yool's father on the throne. 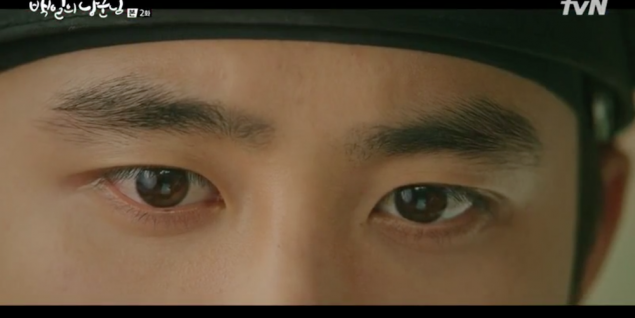 Watch me use my alien superpowers to distinguish the criminal's arrows!

Afterward, Yool further investigates the death of the servant girl who snuck poisoned medicine to him by reviewing the pharmacy records. With a little information from a young, government police chief, Jung Jae Yoon (played by Kim Sun Ho), Yool is able to obtain enough clues to deduce that his princess consort (his wife) Kim So Hye is pregnant. This explains the reason why the princess consort has been more adamant than usual about them finally mating as husband and wife. However, while Yool connects his princess consort's pregnancy with the reason why Kim Cha Un killed the servant girl, we as viewers get to find out a little more. 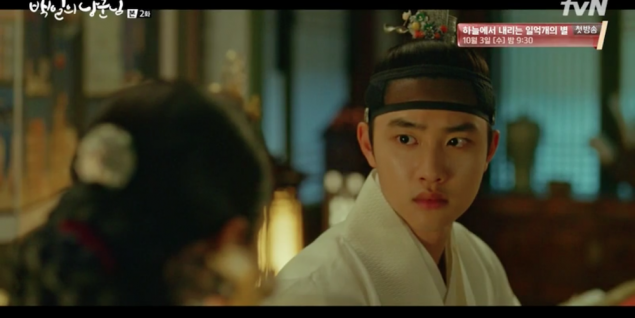 YOU DARE TOUCH ME, PEASANT?! Oh wait, you're my wife.

Alarmingly enough, the cold-hearted, dangerous advisor Kim Cha Un and his daughter, the princess consort, have two different agendas. They're not working together to control Yool's family and hog all the power to themselves. Kim Cha Un, in fact, had no idea that his daughter was pregnant. Even when she tells him she's pregnant, she dismisses the matter of who the father is, and Kim Cha Un doesn't seem like he even cares. Clearly, this father-daughter relationship is strictly business, with not an ounce of blood-related affection whatsoever. 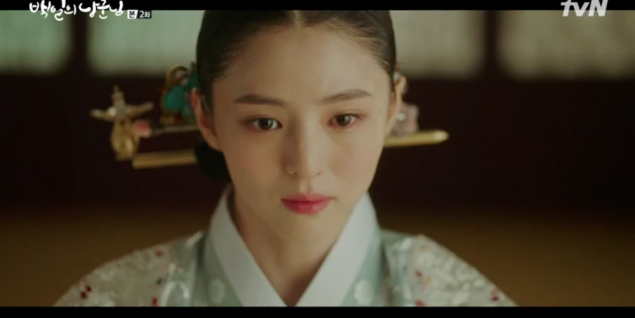 WAIT. Is she even blood-related to Kim Cha Un..?

That was a big mass of potential mysteries to tackle in just the second episode. What's at least very clear is that Kim Cha Un still holds the title of the main antagonist, a role he carried over from episode 1. The princess consort Kim So Hye rises up to the role of the second antagonist, as she seems to be plotting something regarding the child in her womb.

Afterward, Kim Cha Un convinces the king to send Yool as a royal representative to a rites ceremony, praying for rain to the gods. Kim Cha Un then orders his Moo Yeon (played by Kim Jae Young), the mysterious black assassin, to kill Yool during his voyage to the mountains. Here's where I come in with my crazy theory pitch again - I still think Moo Yeon is Yi Seo's lost brother. Look at the way they regard each other, below: 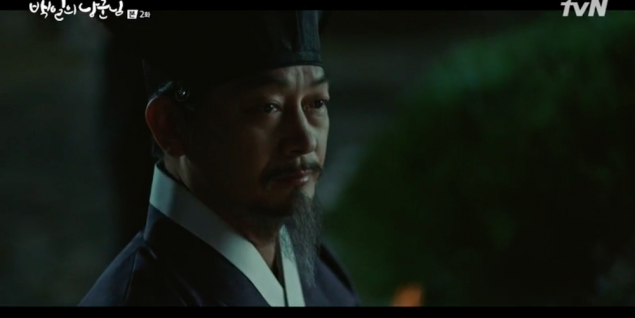 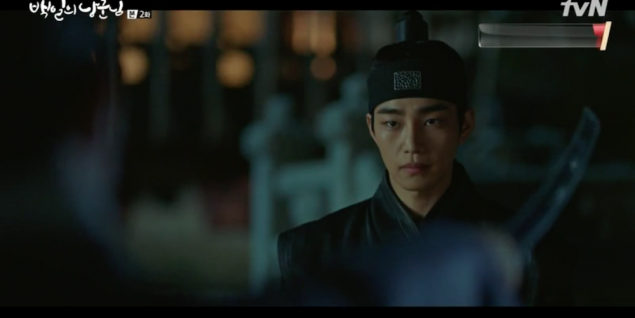 Yo, what's up.
Their relationship isn't exactly the master-faithful servant type, like Yool and his guard Dong Joo. And when Moo Young is summoned this time, Kim Cha Un demands, "Why do you always do as I say, without ever questioning me?" In response, Moo Young asks for a promise to be carried out if he succeeds in assassinating the prince. The drama doesn't reveal what Moo Young's request to Kim Cha Un was yet, but we'll find out soon enough.
Now that we're on the topic of mysterious characters who are still hiding their true identities, I want to also point out how I appreciate the drama using the technique of keeping the side characters' stories very secretive, for the sake of fueling the suspenseful, trust-no-one type of mood. I think this technique was used in episode 2 very advantageously, as it effectively had me trusting in Yool and Yi Seo's characters for what they seem, but suspicious and questioning of all of the other characters' motives. This deliberately slow process of revealing little by little about each of the side characters keeps us on our toes, and to be honest, I wasn't expecting this from this drama. But I mean it in a good way, because I'd been expecting a simple, romantic, light-hearted story, and now I'm invested in the mystery it has to offer. 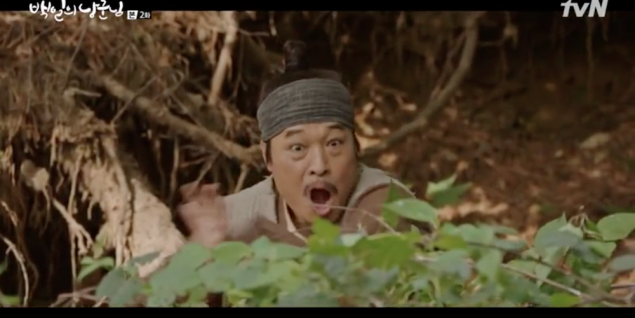 Yes, papa just fell in his own poo.

I wasn't able to dive into Yi Seo in this review, but there was just so much content revolving around the antagonists. Hopefully in episode 3, we'll get to observe more of the side protagonists of the story, especially some of the figures surrounding Yi Seo. Poor Yool has officially lost his memory and is missing from his position as the crown prince, so I'm also anticipating how the drama will approach this issue from within the palace. Overall, episodes 1 and 2 of '100 Days My Prince' were very fulfilling and loaded with good plot, characters, techniques. Stay tuned for more developments next week! 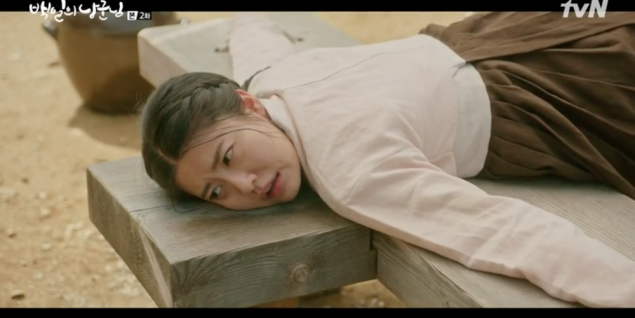 Welcome to Joseon, where you get 100 smackings for not being married by 28. 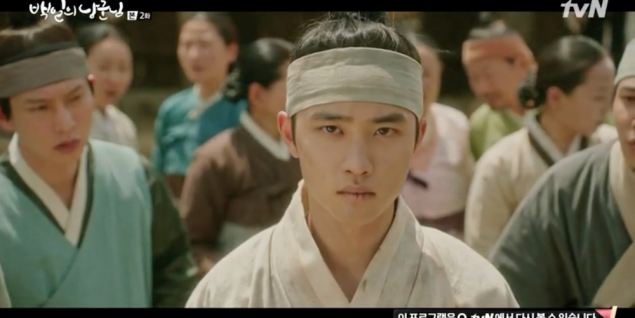 Welcome to Joseon, where you dad picks up a totally husband-material man with memory loss and baby soft skin from the mountains. 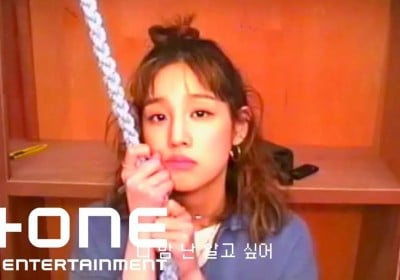 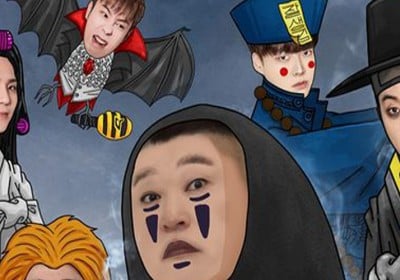 'New Journey To The West 5' drops official poster parodying 'Along With The Gods'?

Netizen suggests set of Girls' Generation's 'FOREVER 1' MV may have been plagiarized from Tokyo DisneySea
1 day ago   51   38,119

Previously unseen photos of Kim Garam show up on the web through an unknown Twitter account
3 days ago   87   113,578