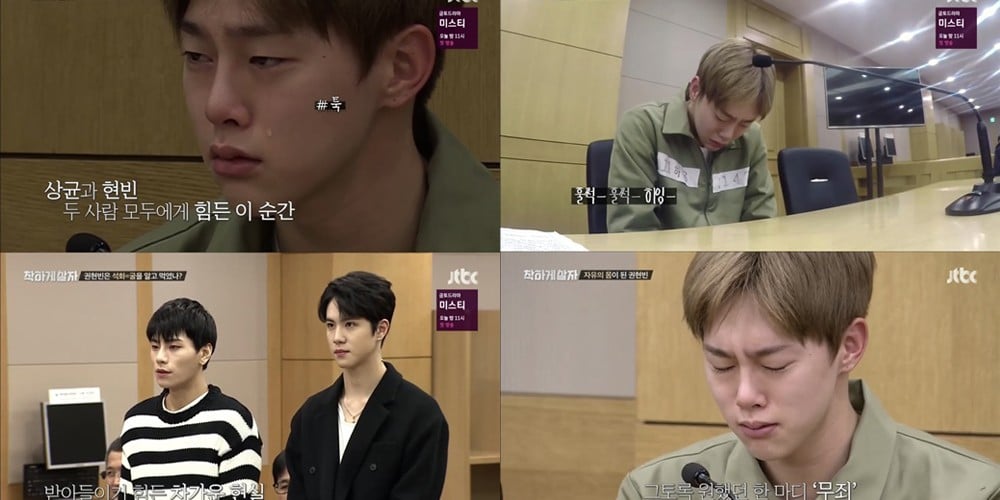 The idol member was accused of inflicting physical harm against fellow JBJ member Kim Sang Gyun. (Remember, the show is partially mock-reality; the celebrity cast members are charged for crimes that are not necessarily serious or real, for the sake of showing viewers a real judicial process.)

To determine whether or not Kwon Hyun Bin deliberately caused his fellow JBJ member harm, Kim Sang Gyun and Kim Dong Han were called up as witnesses. Once his fellow group members emerged, however, Kwon Hyun Bin spilled tears.

Later, Kwon Hyun Bin shared, "I was relieved to see in person that Sang Gyun hyung was okay. It was difficult to face the reality of how big a crime ignorance really is, and how it all compiled into this grave situation."

In the end, Kwon Hyun Bin was voted innocent by all 7 jury members.

The reason why Super Junior's Heechul is always praised every time there is news about a celebrity DUI
2 hours ago   9   17,635

Sung Hoon talks about the truth behind the dating rumors he was embroiled in
2 hours ago   1   5,104

Fans laugh as (G)I-DLE's Shuhua accidentally puts up her middle finger during a performance
5 hours ago   8   9,379

BTS's "Dynamite" awarded the 'Foreign Work Award' by the Japanese Society for Rights of Authors, Composers and Publishers (JASRAC)
31 minutes ago   0   143

Netflix drama 'Hunting Dogs' might have to refilm due to the recent DUI incident involving cast member Kim Sae Ron
51 minutes ago   3   2,327