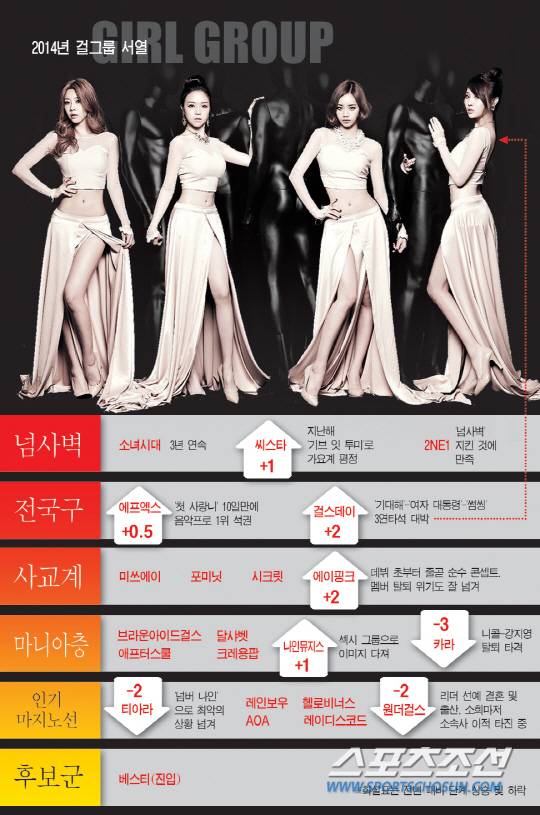 After releasing their '2013 Girl Group Ranking' last year, Sports Chosun is back with their '2014 Girl Group Ranking'. The media outlet talked to various representatives in the singing world to get their assessment of girl groups so far in 2014 to reveal what they believe is the current hierarchy of female idol groups.

Unsurprisingly, the first tier, labeled 'Impossible to Surpass, 4th Level Wall' (aka the 'insurmountable wall') has Girls' Generation and 2NE1 comfortably within the layer. This is undoubtedly the highest level of achievement for any girl group, and impressively enough, Sports Chosun and various reps decided that SISTAR has managed to enter this level through their widely successful hit "Give It To Me".  All their songs have been majorly popular, but this one especially was able to break them through to move one step up from the previous level, 'Nationwide,' which probably suggests nationwide popularity.

Girls' Generation managed to keep their position with ease for 3 years straight, but on the case of 2NE1, Sports Chosun says the various music insiders were conflicted on whether to keep them there. Although 2NE1 released several songs last year and led active promotions overseas as well, insiders seem to feel slightly conflicted because of high expectations for them. The reps say because the girls are 2NE1, they should have done more to surpass Girls' Generation's popularity.

f(x) moved up half a step thanks to "Rum Pum Pum" promotions, while Girl's Day moved up an impressive two full steps to get into this zone with their successful image change starting from "Expectation".

Following is the third layer, 'Social Kingdom,' which is slightly more populated.  A newcomer in this tier is A Pink, which moved up two full steps with the help of their mega-hit "No No No". Miss A, SECRET, and 4minute also clinched their spots in this tier.

Other trending girl groups comfortably take their spot in the fourth level, or 'Mania Level'. Crayon Pop, which wasn't even on the list in the previous years, has made their entrance into the chart on this level, thanks to their massive success with "Bar Bar Bar". Nine Muses has also moved up into this group, showcasing their growing potential. Meanwhile, it appears KARA had fallen three steps to land in this level. Reps speculated that with the loss of both Nicole and Jiyoung, KARA has started to lose some of its spark. Brown Eyed Girls, After School, and Dal Shabet are also comfortably positioned in this tier as well.

Six girl groups are in the second to last layer called 'Maginot Line'. Two of these girl groups is the newcomer Ladies' Code as well as AOA and Hello Venus, both of who were in the tier below last year. Others include the veteran idol group Wonder Girls and T-ara, both of which fell down two steps. Rainbow also kept their position in this tier.

Last but not least, Bestie set themselves apart from all the other newly debuted girl groups as they landed in the last level as 'Potential Candidates'.

Do you agree with the ranking? If it were up to you, how would you rank the current girl groups?

Studio PAV under fire for cancelling VAV’s live ONcast Worldwide Fanmeet an hour after its scheduled time
1 hour ago   2   1,552

Former AOA member Mina allegedly speaks on ChoA after news of her rumored comeback
15 hours ago   40   59,101