I'm not the biggest fan of horror films, but K-Pop's horror specials always crack me up, and with Halloween creeping up real soon, a list of some of the funniest horror specials should be fun. I feel sorry for some of the members being scared out of their minds, but they make the funniest content. Some even forget that they're on camera and just let their dialects out. I'm glad I'm not an idol, or none of the footage will be usable if you get what I mean.

Despite it being funny, just a fair warning that some of these contents actually do have scary visuals. So, please watch at your own risk.

Despite it being almost nine years ago, this was still one of the funniest horror special videos yet. From scaredy-cat Baekhyun who screamed his lungs off, blurted all of his dialects, and drooled too much. Then you have Chen, who was too kind and gave all the ghosts hot packs, as it was a cold winter night. The EXO members really showed all of their different sides in this horror special.

This two-part horror special has got to be one of the most iconic in K-Pop, because of the number of memes this video generated after. Hoshi got caught by the ghosts and obviously tried his wit by teaching the ghosts the dance to their song Left & Right, in hopes of being let go, and then we have The8, who turned the tables and scared the ghosts.

The Boyz - Wings of Escape

Whether or not you're a fan of The Boyz, you would definitely know that their member, Q, loves horror. He even finds Annabelle and Chucky cute. So, it is no surprise that going to a haunted house would be like going to a playground for him. New was terrified and was lucky he got teamed up with the two people that weren't.

The course for this was very simple, but it did have a few jump-scares that even made the confident Allen scream his lungs out. You would probably feel sorry for how terrified Hyeongjun, Wonjin, and Seongmin got, but it was also very heartwarming to see Minhee being there for Wonjin because he knew his friend was terrified, and definitely funny seeing Seongmin trying to hit the ghosts.

This is truly one of the scariest ones; with the creepy background singing that would just subtly play, the mask the ghosts have on, and the other visuals popping up during the course, it really isn't for the weak. The members would have to be quiet whenever the ghost approached them, but instead of controlling their screams, some of the members had trouble trying to control their laughter. That simply couldn't be me.

As part of their comeback content, Pentagon went on Dingo Music and got the scare of their lives. Hui choked on rolled eggs and cursed, while giant maknae, Wooseok, said he wanted to stop promoting, all because they were scared.

We already know that Stray Kids are loud. But turning off the lights made and scaring them made them much louder. Changbin got so scared he forgot that Bang Chan was older and didn't call him Hyung. This two-part horror special also produced various memes, one of them being Hyunjin's "ah so disgusting," and another was Bang Chan's singing and talking gibberish while covering his ears because he was terrified.

How hard would it be to keep singing when you're scared? I assume, very hard. TREASURE had to sing despite being terrified in order to calm down the zombie, and some members kept repeating their own parts, maybe because that was all they could remember at the time. Haruto got so scared, he cried after. Aw, our poor maknae.

Although I do feel bad seeing some of them breaking down doing these contents, but it's also very cute to see when the younger members protect their scared older members. Maknae, Junseo had to protect leader, Daehyeon, who lost his mind, afraid. They weren't given any flashlights, but Yohan smartly used the lights from their action cam to light their way.

When you're scared of the dark, just turn on the lights, right? That's precisely what Sullyoon did. Jinni did too, but it was primarily out of the habit of turning on the lights while walking into a room, but Jinni was simply unaffected. She had to pretend to be scared. Lily got so frightened she totally forgot the lyrics to her own song but still tried her best to sing in cow-version. How cute!

Just because these girls are known for their spooky concepts doesn't mean they're not scared themselves. SuA and Dami couldn't even start, but when they did start, they begged the first ghost they met to go with them in completing the course. I totally get where they're coming from. Hey, maybe one ghost can talk to another into not scaring them, right? But when their turn was over, SuA gained some bravery and tried to scare her other members.

Wonyoung did a rehearsal for being scared, but was still scared nonetheless, screamed at the top of her lungs, and kept wanting to go home. Rei and Liz became the funniest duo because of the two extremes; Rei kept laughing while Liz kept screaming, scared. 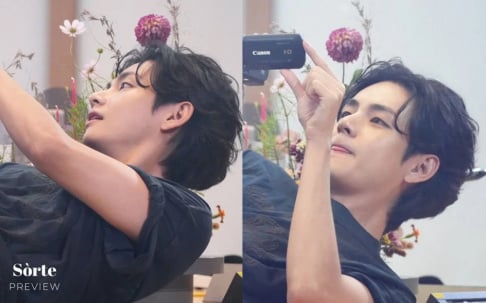 "How does he still look so handsome from this angle?" K-netizens can't get enough of V's stunning visuals in new photos

"It was so easy to break up with him," K-netizens comment on how fast Park Min Young stated she broke up with businessman Kang Jong Hyun

Jennie and Kwangsoo in RUNNING MAN was so hilarious 😂

A former manager tells 'Dispatch' what poor, toxic working conditions Lee Seung Gi was subject to during his debut days at Hook Entertainment
5 hours ago   13   15,790

K-Netizens have a heated debate after Jeremy Erlich, Spotify's Head of Music Strategy, is frequently spotted with BLACKPINK Rosé
1 day ago   156   82,270