Earlier on April 8, EXO member/solo artist Lay, or Zhang Yixing, announced through a set of handwritten letters that his exclusive contract with SM Entertainment has come to an end.

In a similar letter dedicated to fans via Weibo, Lay used his words to further elaborate on his plans for the future. He said, "10 years is considered a very long time, but now that I have arrived at this day when my 10-year relationship with my company has come to an end, it feels like that time just passed by in a flash. In just a blink of an eye, the young boy who entered the company has now become 30-years old."

Lay then continued, "Even though the 10-year contract has come to an end, my heart still remains with the company, and the years that I spent growing with everyone who helped me along the way, they will always remain."

Finally, the EXO member stated, "Today is a day which marks a new beginning. I will continue to go forward with a new relationship with SM Entertainment."

In light of Lay's announcements via his SNS platforms, a representative of SM Entertainment has also spoken up to confirm, "It's true that Lay's exclusive contract has expired. However, the agency is currently discussing various ways to maintain a new type of relationship with him."

Meanwhile, Lay debuted as a member of EXO-M in 2012. In 2015, the singer/actor established his very own studio in China to for his solo activities.

Proud of you lay

I'm genuinely curious, is Lay still in EXO? I assume yes because I don't think I've ever seen any news or announcements from the agency, group, and himself but it just seems like he just stopped being active with the group. Also, for ACTUAL EXO-Ls, do YOU guys consider him as part of a group? There is no right or wrong answer to this, but I'm curious as to how like fans of the group feel about his stance. I personally stopped considering him as part of the group when it seemed like he stopped promoting with them, but of course, that's my take regardless of his official stance. I'm sure there are fans that will always deem him as part and I'm sure the group members probably too, but I just wonder if there are those that kind of feel and think the same way I do about it. I generally think this of any members of any group that really stop being active with a group for such a long time or like, hardly ever. A good exception to this is Twice with Mina and Jeongyeon because their breaks/hiatus weren't for like years.

Netizens talk about how BLACKPINK's Jennie was disliked by some when she debuted but then became the "IT" girl
2 hours ago   15   6,042

Person who claims to be an airline employee confirms that BTS's V and BLACKPINK's Jennie were on a flight to Jeju together
3 hours ago   103   28,795

Lee Hyori talks honestly about her fertility issues on the new episode of 'Tteokbokki Brothers'
49 minutes ago   1   3,534

Lee Hyori talks honestly about her fertility issues on the new episode of 'Tteokbokki Brothers'
49 minutes ago   1   3,534 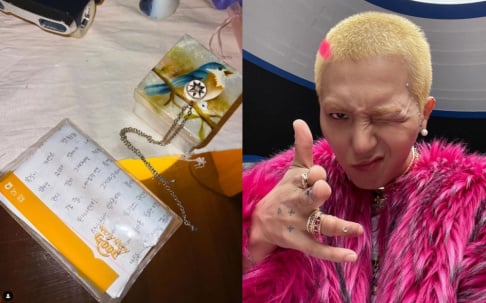 HYBE is allegedly having private talks with Kim Garam's victim for a possible settlement
7 hours ago   162   28,263

How Netizens are reacting to HYBE not considering removing Kim Garam from LE SSERAFIM
1 day ago   214   52,313