Former Big Bang member Seungri, who was originally scheduled to be relieved from his mandatory military service back on September 16, is now being held at the ROK army's military detention center after both his and the prosecution's side chose to appeal the court's initial ruling of his case.

Previously, Seungri enlisted as an active duty soldier in March of 2020. This meant that Seungri was due to be discharged from his service duties on September 16.

On August 12, 2021, the military court concluded that Seungri was guilty of the majority of charges raised against him, and sentenced him to 3 years of prison, a fine of 1.15 billion KRW (~ $989,000 USD), and the registration of his personal information on the national sexual crime offender list.

Immediately after the court ruling, Seungri was put into custody with the 55th division of the ROK military's police sector. Approximately a week after his court ruling, Seungri's legal representative formally appealed the case. The prosecution has also filed to appeal the case, and the appeal trial will be handed over to the the military appeal court for review. Following the appeals, Seungri was transferred from the military police sector to the army's detention facility, where he is being held now.

A case can be appealed in military court up to two times before it is passed on to South Korea's Supreme Court. Currently, Seungri's discharge from mandatory service has been "deferred" while the military appeal court is reviewing his case. Thus far, it seems likely that the former singer may be kept in detention without being discharged until his case fully comes to a close.

Every which way you look at it, he is finished

He needs to start planning his life AFTER he gets out of jail.

All this appeal process won't clear his name

The military trial was a charade. The judge didn't take into consideration other evidences than police and prosecution's fabricated reports while the testimonies of military prosecution's witnesses they were auditioning 8 months in 24 trials given under oath and the defense's evidences and Seungri's 11 hours testimony given in court were dismissed on the day he gave the sentence as unreliable while the prosecution's evidences based solely on police and civil prosecution's reports were considered beyond doubt even if many witnesses declared in court that they were coerced by police to declare against Seungri and their declarations during investigation don't fit with what is written in reports bcs there are phrases which they never said. Interesting that nobody was accused of perjury though their declarations were disregarded. If the police and civil prosecution would have strong evidences against Seungri then they wouldn't have had the need to fabricate the reports and they could have brought him in the civil court in 2019 but they didn't, even their two requests for arrest warrant were dismissed by two different judges for lacking of material evidences, the last one in Jan 2020. If they failed in the civil jurisdiction then they succeeded in the military's jurisdiction with fabricated evidences bcs the military prosecution didn't investigate the case, they just played along the script written by their civil peers. Practically the military judge didn't judge anything just give the sentence since he considered only one side - the accusation and dismissed the other side - the defense, how fair, isn't it? But for their displeasure, Seungri kept pleading innocent excepting one charge which he admitted from start and also he exposed their methods such intimidation and humiliation they used on him to admit what they wanted including the drugs usage to easy their tasks so the military judge totally ignored his defense and sentenced him guilty of all charges with aggravated punishment though he had zero victims bcs how dares this celebrity to defy us? It was from start the presumption of "guilty until proven guilty and guilty by association." The truth can't be buried to no end and a person punished bcs they hold onto their innocence. 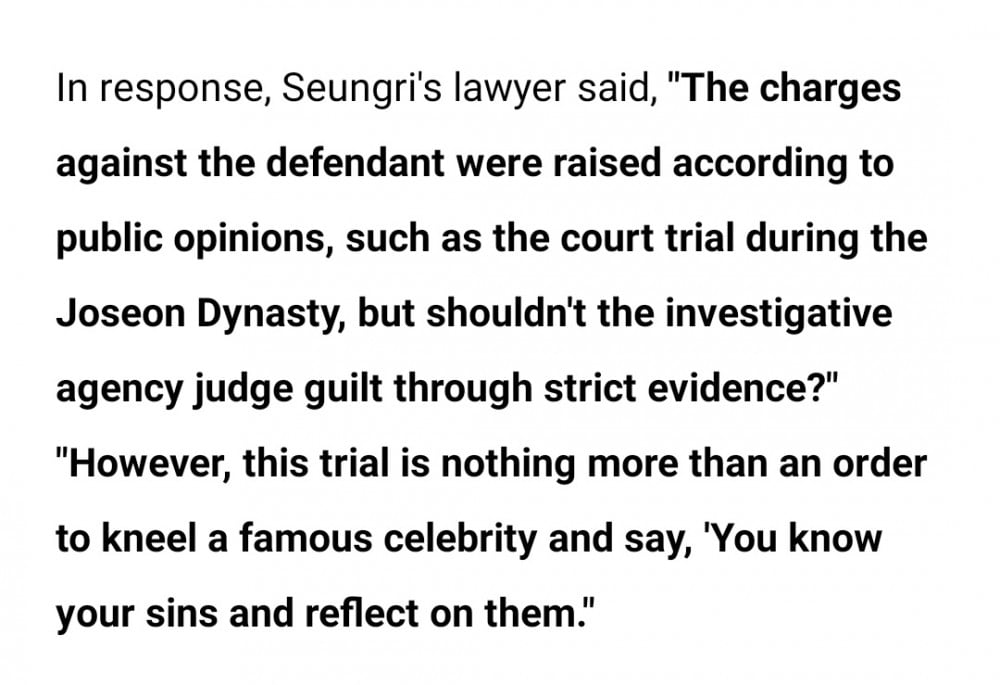 Kim Yong Ho, the infamous YouTube reporter from 'Garo Sero Institute,' is being sued for allegedly molesting a woman
4 hours ago   16   3,925

How Korean netizens are reacting to the voice recording that revealed Kim Seon Ho's ex-girlfriend cheated on her husband with 3 men
8 hours ago   76   75,879

Park Bo Gum gives an update six months before he is discharged from the military
3 hours ago   4   5,492

SM responds after Girls' Generation's Taeyeon is mentioned in the reported list of individuals who recently fell victim to a real estate scam
41 minutes ago   4   7,245

Declining birth rates in South Korea will make it harder to find talented idols in the future
1 day ago   93   28,508

'Dispatch' questions the validity of the claims made by Kim Seon Ho's ex-girlfriend + reveals Kim Seon Ho cooked seaweed soup after learning of the pregnancy
2 days ago   328   186,803