Actor Joo Won opened up about his weight gain after his military discharge.

When a listener asked if the actor ever wants to return to the past, he responded, "I don't want to go back to the past. The present is good. If I go to the future, I want to see what I look like and what goes wrong." As for his weight after his military discharge, Joo Won shared, "I didn't get very bloated, but I gained a little weight because I ate well and exercised a lot. After I was discharged from the military, I suddenly had a shower scene in the drama, so I exercised more."

He also revealed his love for chicken, saying, "I love it. I even ate one chicken a day. I ate it grilled rather than fried."

In related news, Joo Won was officially discharged in February of 2019.

tristanah3,676 pts Tuesday, August 25, 2020 0
I missed him, he's one of my fav actors, I look forward for his drama which will be aired starting with 28 august every Friday and Saturday.
Share

Thanks to EXO Lay's most recent dating rumors, fans find out that the idol has possibly adopted a new cat
6 hours ago   16   12,878

Fans question if CRAVITY not holding a comeback stage on 'M! Countdown' this week has to do with MONSTA X turning down 'Kingdom'
2 hours ago   9   3,157 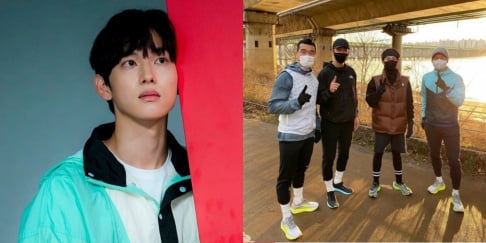 Netizens react coldly to the news that Park Yoochun will be starting his own YouTube channel
2 days ago   104   19,335