Netizens are congratulating ATEEZ's Wooyoung on his successful weight loss, after his latest broadcast appearance on the April 17 airing of 'Music Bank'!

One fan who decided to share Wooyoung's weight loss journey on an online community pointed out that even when Wooyoung first debuted, he wasn't considered 'chubby'. He had a bit of baby fat on his cheeks and was known for his wide thighs.

(Wooyoung before his weight loss)

(Wooyoung telling fans that he's going on a diet)

"Everyone, these days I've cut out flour from my diet!! It was hard at first but now I'm used to it hehe. And if you don't eat flour, it's good for your health too!! Your skin gets healthier and you can wake up more comfortably in the morning..."

(But despite going on a diet, fans noticed that Wooyoung gave himself a few cheating days here and there)

"Atiny~ It's time to carry some extra cash in your wallets... Oh, this isn't flour you know this is fish..."

(Then going back to drinking diet beverages during dance practice)

(Wooyoung explains he did 60 burpees at night after going out to eat sashimi with the member.)

"But I only eat one meal a day? I can't even eat all that much for that one meal, because my stomach got smaller."

And finally!! This is Wooyoung captured on April 17 for the group's 'Music Bank' recording, after losing a total of 10 kg!

Of course, what stood out the most to fans after Wooyoung's 10 kg weight loss was the noticeably slimmer fit of his jeans:

Netizens congratulated the idol for his success by commenting, "Wow, look how much his jawline came alive!", "Woah he looks really handsome after losing weight, but he was pretty handsome before too", "He looks a lot sharper and he seems like he feels lighter after losing weight", "He looks good now, good job", "I mean he looked fine before losing weight too but he looked pretty today on 'Music Bank'", "When idols say they're going on a diet you're always just like, 'there's nothing to lose' but then you can see just what a difference it makes here... I'm motivated now", "10 kg... daebak", and more!

Yet another diet article!👎 Too bad the focus is not on the talent! 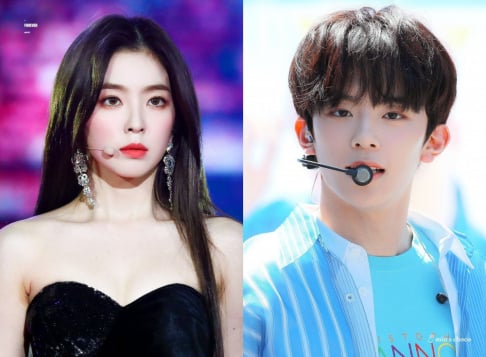 Netizens think VERIVERY's Kangmin could be Red Velvet Irene's little brother due to their similar stunning visuals
1 hour ago   0   1,231

BTS Jimin officially became the FIRST and ONLY soloist in South Korea to have 4 songs surpassing 50M on Spotify!
6 hours ago   12   1,231

Blackpink sets record for highest views for a female Collaboration on YouTube in 24 hours + most #1’s for a female group on ITunes ever and more
5 hours ago   7   1,017

Netizens point out similarities between Baekhyun and Kang Daniel's music videos
23 hours ago   48   22,777