On August 16, Kang Daniel held his first solo fanmeeting 'ColorOn Me' in Singapore and became the first Korean solo artist to hold a fanmeeting at the Singapore Indoor Stadium.

The idol met fans with performances of his songs "Intro (Through the Night)", "Color", "What are you up to", "Horizon", and "I HOPE" and covered Justin Bieber's "Sorry". He also played an assortment of games and ate the infamous durian fruit. Kang Daniel announced beforehand that fan-taken photos and videos were allowed at the fanmeeting. As permission to take footage at K-pop fanmeetings is rare to see, fans rejoiced at Kang Daniel's ability to set the rules as the CEO of his company. Fans left the venue more than satisfied and local reporters even described the event as more than just a fanmeeting, with a feeling similar to a concert.

The emcee of the night, Matthew Liu, had more to say about the event after it ended. He raved about what it was like working with Kang Daniel, praising the idol's manners backstage and how well he took the unplanned moments like tasting the durian and being asked about Wanna One.

After emceeing for Kang Daniel.. I totally get why he truly is kpop's National Idol. We often know a celeb onstage, on-screen.. but there were a few moments that had me totally convinced that KD is absolutely lit and legit.
As far as first impressions go, he was simply next level. At the PC, when the interpreter was translating, I'd whisper prompts to him and he'd always acknowledge, make eye contact and whisper back "thank you" with a smile. He didn't have to. But he did.
Then during the FM, there were moments when I went off script.. teaching him singlish, teasing him about his abs, rigging the games so that fans win and he forfeits, asking him to say something to fans in english, slipping in questions for fans about Wanna One and his fandom name, sneaking a durian on stage for him. None of this was planned. Perhaps some of it I shouldn't have asked or done cos I (still) might get into trouble. But Daniel was really spontaneous and game, giving the best experience and memory for his fans. He was also very sincere.. after the fan video when he was feeling sentimental and gave a really heart felt speech - as the interpreter was translating, I leaned over to tell him I'll be wrapping up the fan meet but he signalled back saying he still wanted to say more to the fans. I think everyone truly felt his love, gratitude and sincerity.
He is just as real behind the scenes.. before the show started, he gathered up with his dancers encouraging them one by one and as he was stepping up on the platform, his dancers were shouting war cry "hwaiting" to him. After the event, he actually went into their room to personally thank them for their effort and hard work. When I apologised for some of the unscripted moments and especially getting him to try the durian on stage (I was honestly afraid he might've been pissed), he was totally cool about it and said "nah it's fine, don't worry about it, it was fun", again and always with a smile. When it was time for us to say thank you and goodbye in private, he said "thank you too" and bowed. There were no cameras, no media around.. he didn't have to, but he did. This is the real Kang Daniel.. Humble. Gracious. Genuine. Sincere. Legend.

Kang Daniel will continue his 'Color on Me' fanmeeting with stops in Bangkok, Taipei, Kuala Lumpur, and more.

Everyone who works with Kang Daniel talks about how well-mannered he is, and this emcee has never written a comment like this for any of the celebrities he's hosted before so Daniel must have left a good impression. It's nice to hear this feedback! 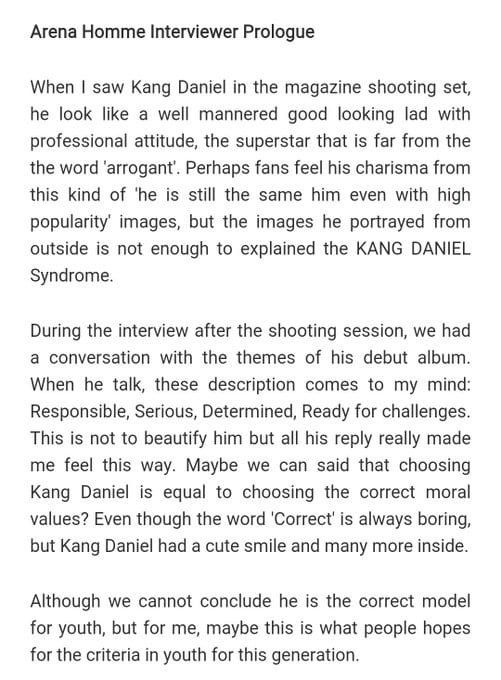 BLACKPINK tease their new character figurine-line in collaboration with 'Jazwares'
11 hours ago   15   14,236