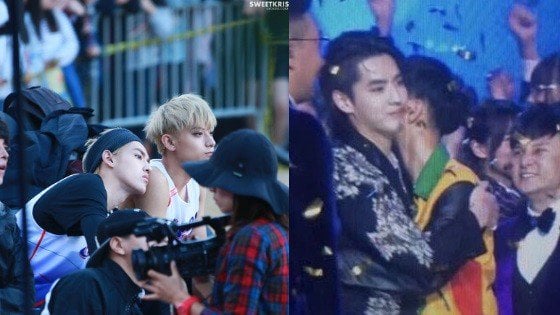 After his departure from EXO in 2015, Tao had expressed himself in an interview with SINA ( Chinese media outlet) in Los Angeles stating that his regret for his anger at Kris. During the interview, Tao shed tears while discussing the misunderstandings people have of him. Tao also opened up about the reason why he left EXO, describing how when he was injured.

Tao revealed later that he was in contact with EXO former member Luhan, but had not spoken to Kris yet and was in Dispute that Kris won't forgive him.

Check out this video of them at the event:

You guys are so late to the party. Luhan followed Kris as well, all is good in the traitor-line, as some EXO fans seem to call them (it cracks me up every time).

Fans all around the world speculate VPN to be the fuel in race to break ITUNES records by BTS ARMY
2 hours ago   41   1,659

Viewers startled as Irene's face suddenly changes during the performance of "Monster" on 'Music Bank'
16 hours ago   43   73,015

Fans all around the world speculate VPN to be the fuel in race to break ITUNES records by BTS ARMY
2 hours ago   41   1,659