Song choruses that became stuck in our heads 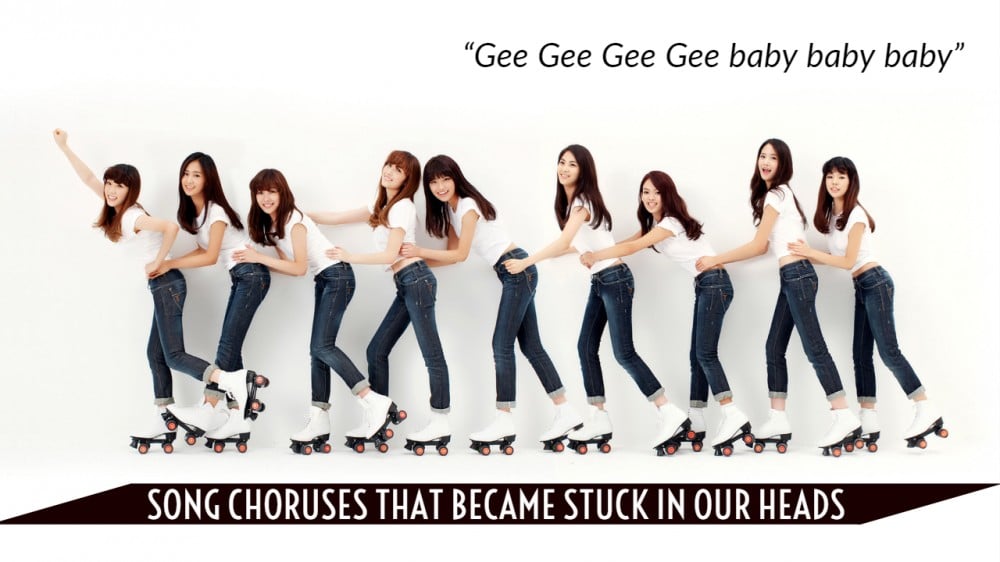 Even if you don't listen to some of K-Pops biggest hits, they somehow always find a way into your brain. It seems like K-Pop songs have the power to infiltrate your mind so that whenever the song comes on, you suddenly find yourself humming along and mumbling the lyrics to the chorus underneath your breath! These songs just have a way of getting in our heads and staying there without us really even trying. Here are some K-Pop choruses that have become stuck in our heads.

"Cheer up, baby!" That's exactly what we do when the song comes on! TWICE has a way of turning a mood all the way around with their upbeat and sweet voices.

With Girls' Generation's "Gee," music fans across the world realized that understanding a language wasn't necessary to learn a song quickly. The intense, catchy hook of "Gee" was a predecessor for a lot of the ultra-popular songs we hear today. Gee's melodic "Gee Gee Gee Gee, baby, baby, baby" and "No no no no no'" are sure to infiltrate your brain even if you don't know the lyrics in between.

If Girls' Generation "Gee" was one of the catchiest lyrical anthems of K-Pop in the mid-2000s, Red Velvet's "Dumb Dumb" serves as a modern equivalent. The catchy "Dumb dumb dumb dumb dumb dumb" riff is infectious!

This is the song that even your parents know! Even the most out-of-touch, living-under-a-rock, individuals will suddenly start doing his iconic dance when "Oppa, Gangnam Style!" hits!

Not only does the beginning intro to "Fantastic Baby" control minds, but the chorus is also impossible to escape. Whether you're at the boba shop, studying at the library, or buying groceries at the local H-Mart, when this song comes on, everyone mutters the lyrics under their breath.

If Girls' Generation "Gee" was one of the catchiest early female K-Pop group tracks, Super Junior's super hit, "Sorry, Sorry" has got to be the male group equivalent. The repetition that was so characteristic of K-Pop songs at the time really helped to cement the lyrics in fans minds for years to come.

"Naege Jeil Jal Naga!" If you're relatively new to K-Pop, chances are if this song isn't your favorite, it's your bias' favorite. The ever-so-memorable lyric is now a K-Pop staple for every K-Pop event! You can bet your bottom dollar that everyone in a crowded arena will scream the chorus to this song if it comes on.

Thanks to the "Ko Ko Bop Challenge," a lot more fans across all fandoms were exposed to this song. Though it has interesting song progression that doesn't necessarily have the repetition of songs aforementioned on this list, EXO's "Ko Ko Bop" has one of the most easily recognized choruses from those who are newer to K-Pop. The intense amount of memes also helped spread the chorus around.
Share this article
Facebook
Twitter
1 8,152 Share 75% Upvoted

Yo these songs really do stick in the head.

Yulhee talks about her children and reveals heart-aching news about her twins
26 minutes ago   1   5,206

Netizens sign a petition to have former YG artist and 1TYM member Song Baekkyung to be removed as a KBS radio DJ
5 hours ago   22   13,066

Korean Netizens claim BTS V is a “Prince” and “Doll” after seeing his stunning visuals in the first teaser photo for “Dynamite.”
18 minutes ago   2   125

Yulhee talks about her children and reveals heart-aching news about her twins
26 minutes ago   1   5,206

One fan files a complaint with the police requesting a proper investigation of the AOA bullying incident
57 minutes ago   8   2,780

Doctors talking with the family of former AOA member Mina about her long-term treatment and care
5 hours ago   20   11,859